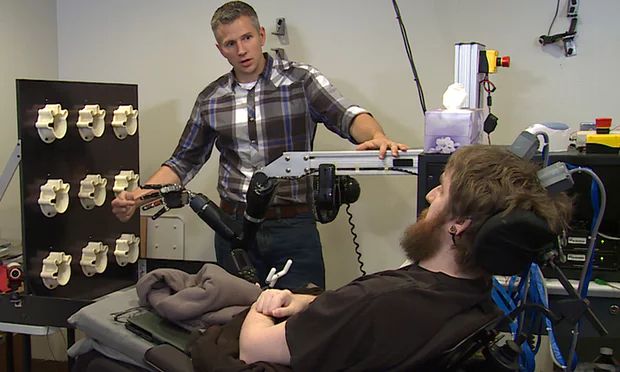 American Nathan Copeland, who became partially paralyzed after the incident 10 years ago, was able to feel the touch of the fingers of a robotic arm. This is the result of an experiment conducted by specialists of the University of Pittsburgh.

Earlier the same group of researchers has already demonstrated the ability to control robotic arms with power of thought, but now scientists first managed to realize the transmission of signals in the opposite direction.

During the experiment the assistant touched the fingers of the robotic arm, the signals were inputted directly into the brain of Copeland. The man was asked to name which fingers touched the assistant. Copeland easily coped with this task. According to him, arose from his feeling was “almost like real”.

“I could feel each finger. It is, indeed, a fantastic feeling,” says Copeland. “Sometimes I felt a sort of electricity, sometimes it was pressure.”

Currently, Copeland is able to manage romosinuano hand. For this he had over six months to wear implanted brain electrodes. During this time he was able to achieve precise movements of the robotic arm.

To Copeland felt a touch to her, he stimulated the areas of the brain that aktiviziruyutsya in these cases, the average person. A man with a blindfold could with 84% accuracy to identify which finger roboticians hands assistant.