Pearl Island from the ISS 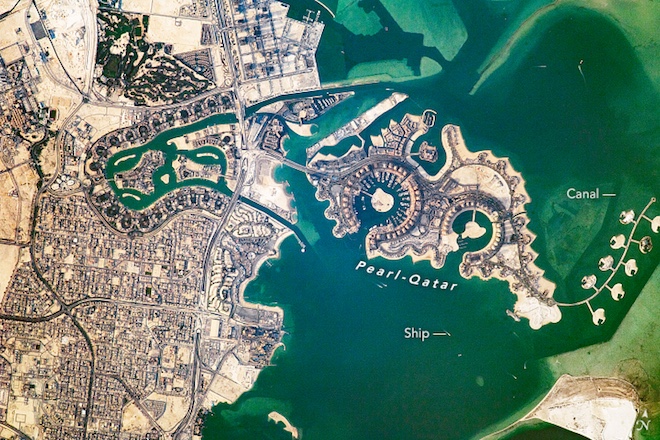 The astronaut aboard the International Space Station took a photo of Doha, the capital of Qatar, located on the north-eastern coast of the Arabian Peninsula. In the center of the bay you can see an artificial island Pearl-Qatar with an area of ​​about 1.5 square kilometers. Around him were dug deep channels that go into the Persian Gulf.

In the past, pearls were mined here. And the name of the island, translated “Pearl of Qatar”, and the infrastructure of the new residential complex, resembling a chain of pearls, remind of this historical fact.

It is expected that the construction, which began in 2004, will be completed in 2018. The complex includes 10 plots, 31 high-rise buildings and 4,700 apartments.

The population of Doha is over 2 million people. This is the center of economic activity in the region. In 2022, the city will host the World Cup, which will be the first football tournament held in the Middle East.

This number of residents and the development of tourism cause problems with the search for stable supplies of drinking water. In Qatar, an arid desert climate with a hot summer season from March to September, and annual precipitation is meager and unpredictable. The groundwater basin, located under the city, is mainly used for irrigation. As a result, to provide the population with drinking water, it is necessary to desalinate the sea.