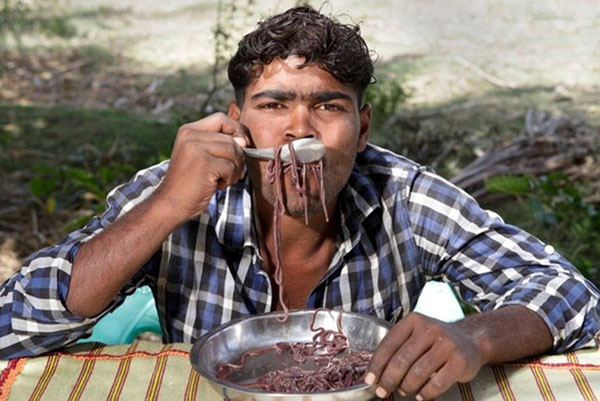 Today, foodies around the world for both cheeks devours raw tuna. Robert Nathan Allen (Robert Nathan Allen), the nonprofit organization Austin, I am sure that after the sushi on the plates of consumers will break crickets and worms.

The growing shortage of food and the humane treatment of animals — good conditions for the spread of entomophagy (nasekomojadny). It is expected that new trends will include not only developing, but also in Western countries. Allen is confident that soon the pancakes from cricket flour and falafel from meal worms will be the same popular dishes like sushi.

Together with 150 other enthusiasts of entomophagy he went to Wayne state University (Detroit), to the thematic of the conference to discuss the prospects of the new industry. The main task of manufacturers at this stage is to overcome the “ugh factor”. So participants of the forum called the sense, that consumers of the civilized countries feel, seeing ease insect.

According to a UN report, 2013, today, about two billion people regularly eat insects — from ants and larvae in Africa to fried locusts in Thailand.

Edible bugs are gradually gaining popularity in niche markets. To insects eyeing proponents of gluten-free diets, and environmentalists. The latter are impressed by the fact that the production of edible insects does not require large tracts of land, significant amounts of water and feed, and is not accompanied by the generation of greenhouse gases and ammonia. Beetles and worms contain more protein than soy and even some types of animal meat.

According to Allen, for food production, you should use only specially-grown insects that will eliminate the risk of infections. Everything is cooked in this way, the products must be a special way to label and warn consumers about possible allergic reactions.

Despite the obvious advances of recent times, the industry is still in its infancy. Five years ago there were only a few farms breeding edible insects, and today, their number has not changed. Allen believes that the influx of investment into the sector is constrained by regulatory and legal uncertainty.

Following the conference the producers of food from insects formed the industrial group, which will defend the interests of the industry and to create clear legislative norms, regulating a new industry.

“Consumers want something new. They still don’t know what new is us,” said Allen to the participants.