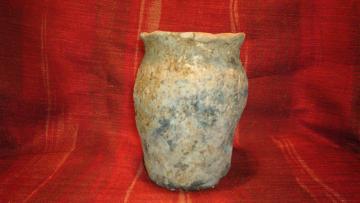 And the chemical analysis of walls of ancient pots helped archeologists to prove excavation in Libya that our ancestors began to cook food in pots and to store ready food in ceramic vessels already 10 thousand years ago,

“Traces of vegetable wax and oils in ancient ceramics draw to us absolutely other picture of how inhabitants of the Sahara used ware in comparison with what occurred in other regions of the world at that time. All this very well keeps within our theories that domestication of animals and a cultivation of plants went different ways in Africa, Europe and Asia” — Richard Evershed from University of Bristol (Great Britain) tells.

Evershed and his scientific team are one of the most famous “molecular” archeologists. For the last 15 years it and some other the famous historians and chemists opened a set of secrets of the past, including a secret of how ancient Egyptians embalmed mummies when inhabitants of Europe learned to do cheese and when Africans cultivated cows and learned to drink milk, and also many other things.

The majority of these opening became possible thanks to simple observation – walls of pottery comprise a set of a time where molecules of the fats, whites and other substances which are contained in food often get. Respectively, studying of their structure and quantity can prompt what products were stored in a vessel.

Having opened milk traces in the clay crocks which are recently found in Tarakori’s settlement in Libya, Evershed and his colleagues thought whether similar vessels for cooking of porridges and soups could be used, considering a large number of traces of the fact that ancient Libyans or grew up a large number of different cereals, or brought together them in neighboring steppes.

Experimenting with boiled and crude food, the British archeologists found out how it is possible to distinguish traces of boiled and crude food in pot walls. They found out that cooking process in a special way changes structure of the wax molecules which are contained in large numbers on a surface of all plants and their fruits, and traces of these changes can be found easily by means of the ordinary gas chromatograph.

One more trace of cooking is that scientists found in walls of vessels traces of the unusual fatty acids which are contained in palm-oil which probably owners of these pots added to “porridges” during their preparation. Presence of traces of milk and vegetable fats at about a half of crocks, in turn, says that Tarakori’s inhabitants added milk in cooked by them already 8-6 thousand years ago I go.

This opening as Evershed notes, became rather unexpected for his team as earlier archeologists considered that the first rudiments of farmer art and a civilization appeared in this region of Africa about 4,5 thousand years ago. As Evershed assumes, it speaks well for the fact that residents of Libya at first “invented” art of preparation of vegetable food in pots, and only then mastered agriculture when savannas in the north of Africa began to be absorbed by the Sahara.