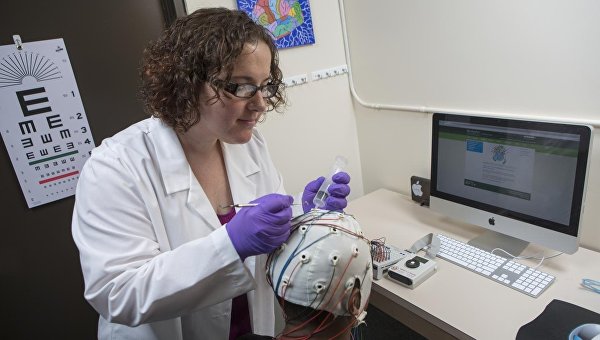 A geophysicist from California says that a person, as well as some fish and poultry, has a built-in “biocomputer” that allow us to sense magnetic fields including the Earth’s field.

“Faraday cage was the key to this discovery only a few years ago when we installed it in our laboratory and defended the participants of the experiments from interference in the form of radio waves and electromagnetic noise from computers, elevators and other devices, we started to get something worthwhile results,” says Joe Kirshvink (Joe Kirschvink) from the California Institute of Technology in Pasadena (USA).

Kirschvink and his colleagues, biologists and geophysicists for several decades trying to unravel the mystery of how almost all birds and many fish and even sea turtles are able to “see” the magnetic field lines of the Earth, to learn their pattern and use it to search for spawning grounds, wintering areas and beaches.

This mechanism is not fully understood, there are many different hypotheses about the principle of “biocampus” — for example, scientists have discovered a “magnetic” receptors in the beaks of pigeons among neurons in the retina of European Robins birds and fruit flies. It is believed that people do not have the sensitivity to magnetic field, however, this view is often disputed.

One hypothesis States that the sensitivity to the magnetic field depends on proteins from the family of crypto-chromes (CRY), which are present in the human body, which gave reason to believe that we have a sixth, “magnetic” sense that almost ceased to work, for whatever evolutionary reasons.

California geophysicist decided to seriously search for the answer to this question by creating a special “magnetic” laboratory, the direction and strength of the field in which it is possible to flexibly change, by increasing or boosting the voltage on induction coils surrounding the room in which sits a volunteer. The whole system was protected from the outside world through the above-mentioned Faraday cage – essentially a box of wire mesh connected to the grounding system.

When the participant experiences inside this “cage”, Kirschvink and his colleagues watched how varied the pattern of activity of brain using electroencephalograph, made of brass and other non-magnetic materials. In total, through this system it took 19 people, including himself Kirshvink, as well as scientists from Japan, the inspection results of his work.

For reasons of clarity, operation of the computer to control the voltage at the coils “cells” were configured so that neither the participants nor the scientists themselves didn’t know whether it changes the magnetic field inside the cells or simply inhibits external sources of electromagnetic fields.

Analysis of the results of this experience, says California geophysicist, showed that man does have a magnetic sixth sense and can sense the direction of magnetic fields, though, and makes it worse than the animals. According to him, all participants of the experiments in the same way react to changes in the strength and direction of the field, which was reflected in their EEG.

For example, the rotation of the magnetic field led to decrease in power of alpha rhythms in the brain with a delay of several hundred milliseconds, which suggests that our nervous system processed information on changes in the strength and direction of the field. Interestingly, this effect was shown not always – the brains of volunteers responded to a magnetic field only when rotating counter clockwise and up and down.

As says Science, other scholars have interpreted these findings with caution — they do not doubt that Kirshvink really did all these experiments and did not alter the results, but they are not sure about his interpretation of the data. On the other hand, himself a geophysicist said that his Japanese colleagues are getting similar results in their experiment with similar performance, and is willing to say that a person does have a sixth sense.