People influence the occurrence of lightning 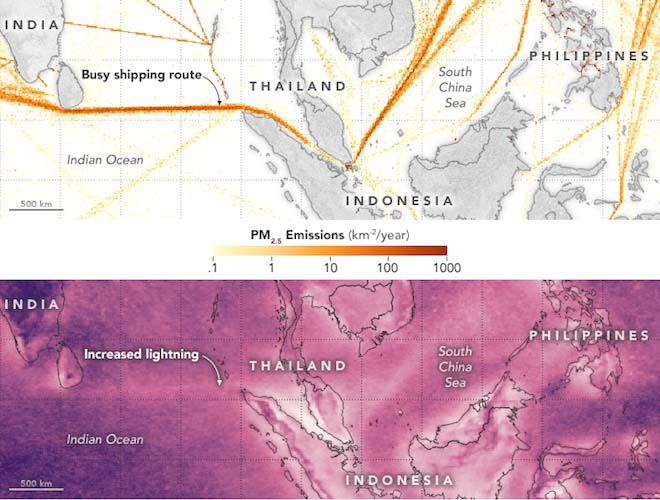 The probability of a flash of lightning is not the same everywhere. This phenomenon is more common on land than over the oceans, and mainly in areas closer to the equator than in the middle and high latitudes. According to recent studies conducted by Joel Thornton, an atmospheric expert from the University of Washington, people can also influence the occurrence of an electrical discharge in the sky.

The connection between people and lightning can be observed in the areas of the two busiest shipping routes in the world in the Indian Ocean and the South China Sea. The upper map shows the orange emissions of particles from the ship’s exhaust gases, calculated on the basis of the database of traffic of sea vessels in the region. The second map shows the average density of lightnings per year from 2005 to 2016, according to the World Network of Lightning Localization (WWLLN). Narrow light lilac stripes indicate where there has been an increase in the number of lightning. Comparing these two images, you can see that the areas with the largest number of lightnings coincide with the routes of the vessels.

Researchers have found that, on average, the frequency of lightning above the navigable pathways is twice as large as in areas directly adjacent to these bands. “It was a surprise to find this feature in the data, and so clearly expressed. Our discovery is one of the most striking examples of human exposure to the atmosphere, the consequence of which is the increased lightning fastness of storms, “Thornton said. He noted that the idea of ​​the effect of aerosol particles on the intensity of storms and lightning was discussed for more than a decade, but scientists could not come to a consensus on the importance of this effect.

Ground-based WWLLN sensors record lightning on the entire planet. Recently, the work of Katrina Virts, an expert in the atmosphere at the Space Flight Center. Marshall NASA, has made the network even more valuable. Recycling the global climatology of lightning, she was able to increase the resolution five times. Now the location of lightning strikes can be determined with an accuracy of 10 square kilometers.

These high-resolution maps led Thornton and his colleagues to the hypothesis that the ship’s exhaust affects the occurrence of lightning. The team compared surface lightning data in the shipping corridors of the Indian Ocean with data obtained by the Lightning Imaging Sensor on the Tropical Rainfall Measuring Mission (TRMM) satellite.

They also used the TRMM radar data to check whether certain parts of thunderclouds actually contained more liquid droplets among the particles of water vapor and ice. Such an increase could occur if particles from ship emissions changed the structure of clouds in this area.

“Our results show that aerosol particles from exhaust gases actually turn a tropical storm into a thunderstorm with lightning, increasing the vertical development of storms,” ​​concluded Thornton.