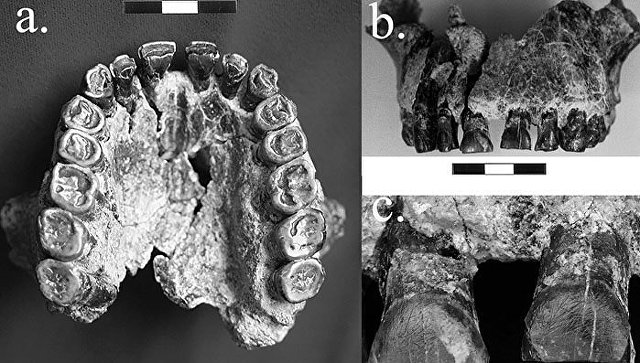 The teeth of the person which are ground off on the one hand skillful were prompted to scientists that the phenomenon of a pravorukost and a levorukost has appeared among our ancestors already 1,8 million years ago, it is told in article published in Journal of Human Evolution.

“We believe that this opening says that hemispheres of a brain specialized in the solution of different tasks much earlier, than we think today. We knew also before that brain hemispheres at skillful people differed and that they were more similar to us, than to the highest primacies. As it appears, these similarities extend also to a pravorukost that as we consider, is a key to understanding of evolution of the person” — David Frayer from university of Kansas in Lawrence (USA) has declared.

Today many inhabitants and scientists consider that they the left and right hemisphere of a brain are adapted for the solution of different tasks – his right half is responsible for “mathematics” and logical thinking, and left – for an oral, written language and creative abilities. In principle, confirmations of it have been found during experiences. In particular, Brock and Vernike’s so-called zones which are responsible for the speech are in the left half of a brain.

Besides division of functions, hemispheres also differ in extent of the influence on work of all brain and an organism in general. External manifestation of this domination of one of halves of a brain is the pravorukost and a levorukost – in the first case “main thing” is the left hemisphere, in the second — right.

Earlier development right-and levorukost was considered as anthropologists as one of key signs of the person and a sign of development by him of the speech and other difficult abilities, unique for our look. On the other hand, in recent years scientists have begun to say that some other species of mammals – for example, a kangaroo and chimpanzees, use mainly one hand for production of food or the solution of other tasks too that has generated new disputes on evolutionary value of this feature of the person.

Freyer and his colleagues believe that they managed to prove the return, studying one of the most known fossils of skillful people, Homo habilis, the most ancient immediate ancestors of the person. These remains have been found in the gorge Olduvay in 1995, and they represent one of the most well remained jaws of the skillful person in which there are actually all teeth and some bones of the top half of the face.

poison with these remains has found primitive instruments of labor and the bones scratched by them which for the first time have unambiguously shown that ancient people could pass tens of kilometers in search of suitable “raw materials” for production cut and that they used them for cutting of food.

Studying photos of this jaw, authors of article noticed unusual scratches which were present only at “front” side of teeth on the right side. Almost all these scratches went from the right upper corner of teeth to the bottom left corner, and extremely seldom met in other parts of tooth. The similar unusual drawing of scratches Freyera interested, and scientists studied scratches in more detail, having made a special mold from a jaw of epoxy, “having increased” it several times.

As showed their analysis, at teeth of an ancient hominid there were over five hundred similar deepenings left as scientists, instruments of labor assume. Homo habilis held cut in the right hand during cutting of production which it held in teeth and which it dragged out the left hand. Sometimes blows were too strong and cutting “tool” scratched them teeth, leaving on them characteristic flat hollows.

According to Freyer, availability of similar scratches is the unambiguous certificate of the fact that skillful people were “right-handed persons”, as well as most of modern inhabitants of Earth and that their brain was divided into “subordinate” and “dominating” half too. It as the anthropologist emphasizes, doesn’t mean that Homo habilis were able to say, however, as Freyer considers, a pravorukost and separation of hemispheres was the first step to finding of reason and the speech.