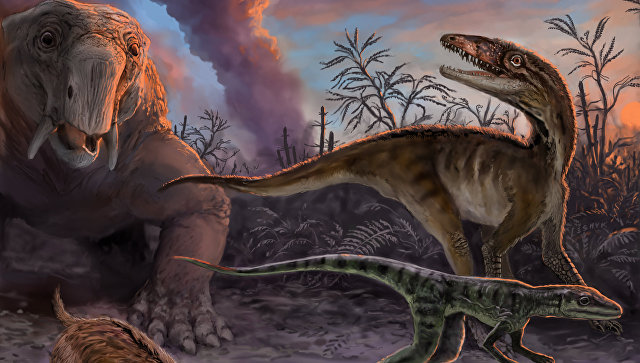 Chinese scientists have found evidence that the Permian extinction, the largest catastrophe in the history of the Earth, occurred for “instants” by geological standards, in a matter of thousands of years. Their findings were presented in the journal GSA Bulletin.

“Most likely, 90% of the species of animals that existed in the Perm period have disappeared for several thousand years or even a shorter period of time.” Current dating techniques do not allow us to narrow this estimate to a figure less than 30,000 years, “says Shen Shuzhong ( Shen Shuzhong) from the Institute of Geology and Paleontology of the CAS in Nanjing (China).

Scientists distinguish the five largest mass extinctions of species in the history of life on Earth. The most significant is the “great” Permian extinction, when more than 95% of all living creatures that inhabited the planet disappeared, including bizarre animals, close relatives of the ancestors of mammals, and a number of marine animals.

There is evidence that at that time large amounts of carbon dioxide and methane were thrown into the atmosphere and oceans, which dramatically changed the climate and made the Earth extremely hot and arid. As shown by Russian geologists, these emissions have come to the surface of the planet in Eastern Siberia, in the vicinity of the Putorana and Norilsk plateaus, where about 252 million years ago there were powerful outpourings of magma.

Most scientists today are confident that these outpourings of lava have been implicated in the extinction of animals, but the specific mechanism of their action on the climate and ecosystem of the Earth is still a matter of controversy.

Some geologists believe that its action was “instantaneous” – it immediately killed a huge number of animals, while their opponents believe that the extinction could last for several million years and was associated with a number of indirect environmental consequences of these outpourings.

Shuzhong and his colleagues found that the supporters of the first theory were much closer to the truth by studying the rocks that formed during eruptions in Siberia on the seabed that covered almost the entire surface of modern China at the end of the Paleozoic.

They managed to find extremely unusual deposits in the central regions of the province of Guanxi, who simultaneously told them how quickly the animals died, and how the process of their extinction was proceeding.

This part of China at that time was covered with a large number of shallow water, deposits on the bottom of which formed about 100 times faster than in other parts of the earth. Thanks to this, the traces of the end of the Permian era, including the fossil remains of marine fauna, are much better preserved here, which allowed scientists to calculate their age very accurately and to understand when the catastrophe began and what it was connected with.

As their calculations show, the Perm extinction began approximately 251 million 939 thousand years ago, which coincides in time with the peak of eruptions on the Putorana Plateau. At that moment in time, as the remains of the Guanxi fauna of that time show, the bottom of the sea was covered with a thick layer of volcanic ash, and about a third of the species of marine animals that lived in the seas at the future site of China disappeared without a trace.

The reason for this, judging by the changes in the shares of oxygen and carbon isotopes, was that the air and water temperatures rose sharply by 5-10 degrees Celsius. This probably led to a sharp restructuring of oceanic and atmospheric “pipelines” of currents and winds and extremely abrupt changes in the work of ecosystems in all corners of the earth.

All this, as the scientists note, suggests that the outpouring of magma in Eastern Siberia almost instantly killed the flora and fauna of the Permian period, spending on it from a couple of thousand to 30 thousand years. This casts doubt on theories suggesting that the Permian extinction had several phases and stages, geologists conclude.