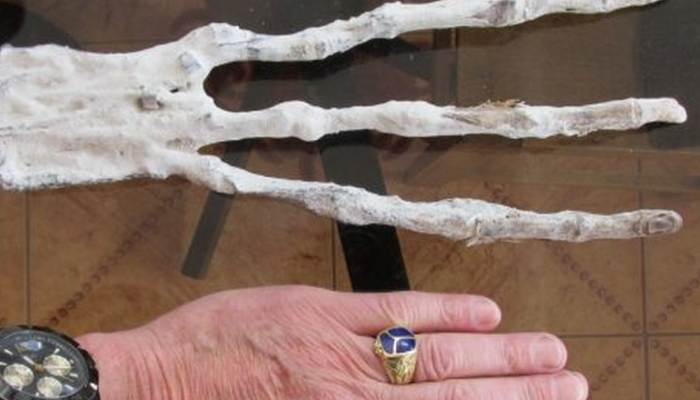 About 2 months ago news about an unusual find – a tiny mummy of the humanoid with the extended head came from Peru. And here again news about the strange find, is a hand this time with three lengthiest fingers which is not similar to extremities of terrestrial entities. Besides lack of a thumb there are many other strangenesses.

It is not excluded that the entity with so extended fingers could have also the extended skull. Information on a find very little. It is known only, as the hand and a skull were found by the same person in Cuzco.

In a picture clearly it is visible that fingers exceed the size of human and have five joints and six bones. Also there are several broken bones around a palm. On one of fingers from outer side there is a nail, and quite well-groomed, and the piece of metal which can be an implant sticks out of skin.

The found artifact, as well as other strange finds from Peru and other countries of South America, are exposed to careful studying. This year the analysis of DNA will be carried out to the USA. Of course, scientists do not exclude that the hand will be, only, a paw of an idler, koala or other mammal.