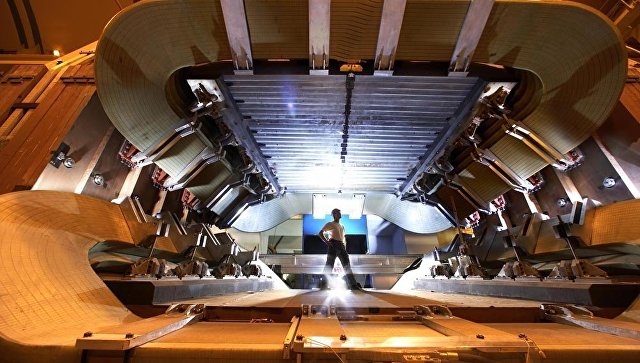 The Large Hadron Collider detected five new particles at once, containing so-called “charmed” quarks; The discovery was made in the study of the decay of superheavy cousins ​​of protons that do not exist in nature, according to an article posted in the electronic library arXiv.org.

“They can be considered both as separate particles and as excited states of the same particle, which is more correct – the thing is very subjective.” Unlike excited hydrogen atoms and other particles, in this case the quarks interact strongly with each other in a special way. Each of the variants of these interactions can be considered as a separate entity, although they consist of the same quarks, “says Lubos Motl, a Czech theoretical physicist and former Harvard professor.

All open particles, as the LHCb collaborators, including a number of Russian physicists write, are variations of the omega-hyperon, a superheavy particle containing three heavy quarks. In other words, they can contain “enchanted” (c), “adorable” (b) and “strange” (s) quarks, but not lower or upper subatomic particles, of which protons and neutrons are composed.

The properties of all these particles have long been predicted by the Standard Model of Physics, and many of them have already been discovered by scientists in the past half-century. However, not all omega-hyperons have been studied in practice. Features in their decays, as the authors of the article note, can point out the problems of the Standard Model and suggest whether there is a new physics beyond its limits.

Observing the birth and decay of such particles, physicists from LHCb quite unexpectedly found traces of five previously unknown omega hyperons with a mass of about 3 GeV (about three times that of a proton or a neutron).

Surprise was that they did not contain the so-called “adorable” quarks – subatomic particles, to study the properties of which the LHCb detector was created. Particles containing b-quarks are considered to be the main candidates for the role of “gateway” in the world of new physics – in their decays, scientists recorded several oddities explaining the differences between matter and antimatter and going beyond the standard model of physics.

As participants in the collaboration suggest, they managed to open five bound states of omega-hyperons, consisting of two “strange” and one “enchanted” quarks. Such particles have a zero charge, which distinguishes them from almost all other omega hyperons possessing a charge of +1, -1 or even +2.

In general, as noted by Motl, the properties of these particles correspond to what the Standard Model predicts, and therefore they are not of great interest for the search for “new physics”. Nevertheless, discussions about whether they are one particle or five different objects can lead to the discovery of other, more interesting particles on the LHC.