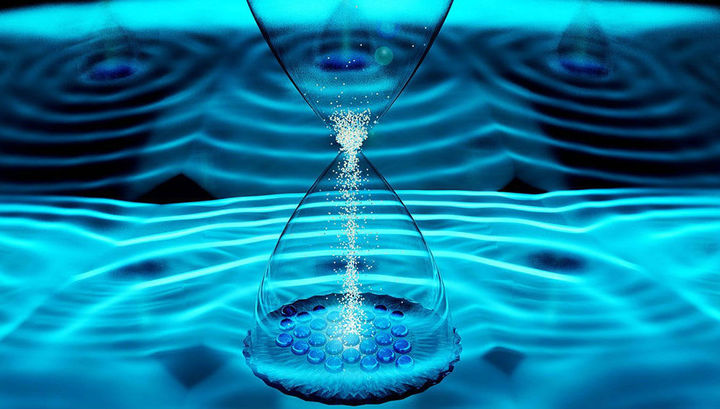 American physicists first created the so-called time crystal – the state of matter, which breaks the temporal symmetry. Despite the name, the new invention will not allow traveling to the past, but in the future it can be used to store information in quantum computers.

Let us explain. The laws of physics say that empty space has a symmetry, and no point is different from any other. But crystalline substances, such as diamond or salt, violate this rule, since their atoms are fixed in strictly defined places.

In 2012, Nobel Prize winner in physics Frank Wilczek, became interested in the following question: why symmetry never collapses in time spontaneously, and also whether it is possible to create a system in which this will happen. Inspired by the structure of the crystals, he suggested that you can create structures that are ordered in a special way, which will change over time, without any expenditure of energy.

First, the scientist represented such a crystal in the form of a ring of quantum particles that would rotate infinitely in a weak magnetic field, constantly returning to its original state, without any external influence. At the same time, the system will be at a minimum energy level, which means it will not be able to produce energy. And yet this idea was so much like a perpetuum mobile that the author himself considered it too bold and presented a simplified version in which the quantum system never comes to an equilibrium state.

In ordinary matter, “hotter” particles transmit energy “colder” until the temperature is leveled and the entire particle system does not reach thermal equilibrium. However, in the crystal of time this does not happen, and the atoms constantly undergo cyclic changes, returning to their original positions and going to the next circle.

In the next five years, a number of works were published that argued in favor of and against the theory of Wilczek. In particular, a year ago a team from the University of California at Berkeley described the method of creating a time crystal in the laboratory, and now this approach has borne fruit, although it has not reached the rings that rotate unassisted.

A group of Californian scientists led by Norman Yao joined forces with the team of Christopher Monroe from the University of Maryland.

As reported in the press release, the researchers compiled a chain of ions of the chemical element of ytterbium and cooled it to a temperature close to absolute zero, when the energy state of the system is reduced to a minimum, and they pass into the so-called ground state.

Then the team acted on the circuit with laser pulses, which forced the atoms to change their spin. If you “shoot” ions in a series of two pulses with a precisely aligned frequency, they first change the spin by 180 degrees, and then return back to the original value. But if the frequency of the laser pulses is different, the spin rotates not in the exact opposite direction and can no longer return to its original position.

Scientists simultaneously worked on the system with two types of lasers. One – exactly adjusted – turned the spin of the ions. Another – creating unorganized pulses with different frequencies – made the spins interact with each other in a random way.

If there was a temporary symmetry, the spins had to change chaotically. But scientists found that, despite the random switching on and off of lasers, the spins of the ions were synchronized and rhythmically oscillated in a clearly predictable sequence, which was required from the time crystal. Moreover, when the researchers slightly knocked down the frequency of the first laser, the system continued to oscillate with the original frequency.

Such a system can be compared with a bell, which is beaten every second, but the ringing is heard once in two seconds.

“This is the essence of the time crystal,” says Yao, “you have some kind of driving force that affects the system at a certain periodicity, but the system somehow synchronizes so that you observe its fluctuations with a different frequency.”

A detailed study of the Monroe team was published in the journal Nature.

However, we add that on this the history of bizarre matter is just beginning. Wilczek’s works inspired other physicists to experiment with unusual ones.

So at Harvard University, a team led by Mikhail Lukin approached the question differently. Physicists took a diamond whose crystal lattice contained numerous inclusions of nitrogen atoms. Each such defect (instead of carbon atoms, the nitrogen atoms were located) had a spin, and together they created a natural disordered background. When the team of physicists used microwave pulses to turn their backs, they saw that the system reacts rhythmically, but not in time with the pulse frequency. The results of the study were also published in Nature.

Both studies have shown that time crystals remain stable even with small changes in conditions. This means that in the future they can be used in quantum systems, which are now very difficult to control. But until this point, other groups of physicists have yet to verify the conclusions of the experiments, which lasted less than a millisecond.