Physicists first caught the gravitational waves from the confluence of stars 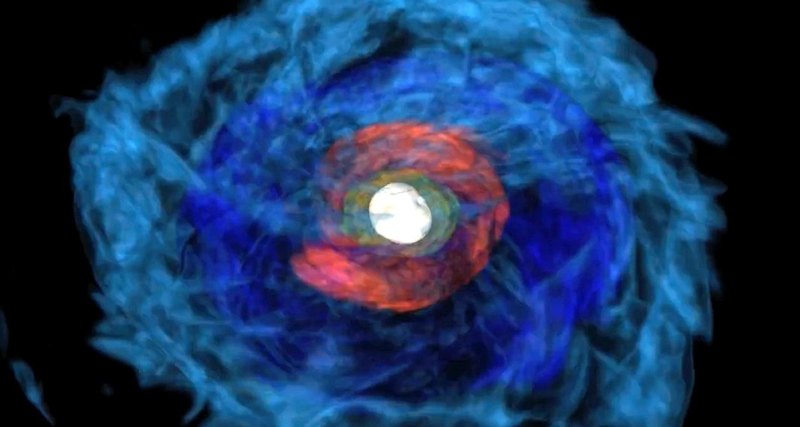 On Monday, at a press conference in Washington, scientists officially announced the registration of an astronomical event, which no one registered before – the fusion of two neutron stars. Based on the results of the observation, more than 30 scientific articles were published in five journals, so we can not tell at once about everything. Here is a summary and the most important discoveries.

Astronomers observed the fusion of two neutron stars and the birth of a new black hole.

Neutron stars are objects that appear as a result of explosions of large and massive stars (several times heavier than the Sun). Their dimensions are small (in diameter they are usually not more than 20 kilometers), but the density and mass are huge.

As a result of the fusion of two neutron stars in 130 million light-years from the Earth, a black hole was formed – an object even more massive and dense than a neutron star. The fusion of stars and the formation of a black hole was accompanied by the release of enormous energy in the form of gravitational, gamma and optical radiation. All three types of radiation were recorded by terrestrial and orbital telescopes. Gravitational wave recorded observatories LIGO and VIRGO.

This gravitational wave was the most high-energy of all, observed so far.

All types of radiation reached the Earth on August 17. First, the ground-based laser interferometers LIGO and Virgo recorded periodic compression and expansion of space-time – a gravitational wave that several times rounded the globe. The event that generated the gravity wave was called GRB170817A. A few seconds later, the NASA’s Fermi gamma telescope registered high energy photons in the gamma range.

And then something began: after receiving a warning from the LIGO / Virgo collaboration, astronomers around the Earth tuned their telescopes to the coordinates of the radiation source.

On this day, large and small, terrestrial and orbital telescopes, working in all ranges, looked at one point in space.

Based on the results of observations at the University of California (Berkeley), a computer simulation of the fusion of neutron stars was made. Both stars were, apparently, a mass slightly larger than the Sun (but with a much smaller radius). These two balls of incredible density circled around each other, constantly accelerating. Here’s how it was:

As a result of the fusion of neutron stars into space, atoms of heavy elements-gold, uranium, platinum, have fallen into space; astronomers believe that such events are the main source of these elements in the universe. Optical telescopes first “saw” blue visible light, and then ultraviolet radiation, which was replaced by red light and radiation in the infrared range.

This sequence coincides with the theoretical predictions. According to theory, colliding, neutron stars lose part of the matter – it is sprayed around the site of the collision by a huge cloud of neutrons and protons. When a black hole begins to form, an accretion disk is formed around it, in which the particles rotate at a huge speed – so huge that some overcome the attraction of the black hole and fly away.

This fate expects about 2% of the substance of the colliding stars. This substance forms around a black hole a cloud with a diameter of tens of thousands of kilometers and a density approximately equal to the density of the Sun. Protons and neutrons, of which this cloud consists, coalesce, forming atomic nuclei. Then the decay of these nuclei begins. The radiation of decaying nuclei was observed by terrestrial astronomers for several days. For millions of years, since the event GRB170817A, this radiation has filled the entire galaxy.