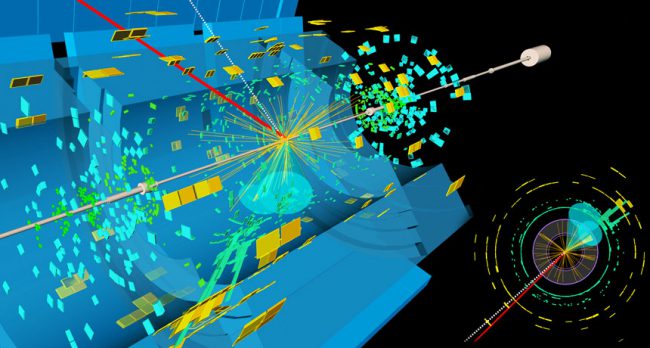 Physicists have finally seen how an elementary particle, first discovered at the Large Hadron Collider, breaks up into two lovely quarks, exotic and short-lived particles that often appear after a collision of high-energy particles. This elusive process we were able to observe only now, for the first time in six years after the discovery of the Higgs boson. Scientists of two experiments of the LHC, ATLAS and CMS, reported their results simultaneously at a seminar that was held at CERN on August 28.

Scientists do not see the Higgs boson. They observe the fragments that remain after the decay of the Higgs boson into less massive particles. The Higgs boson is expected to break up into two adorable quarks most of the time. But so far scientists have not been able to observe this process, because other mechanisms can produce adorable quarks and mimic the decay of Higgs. Scientists have previously seen how Higgs breaks up into other types of particles, including particles of light – photons. This process does not create problems with the Higgs simulators.

The elusive decay of an elusive particle

When the Higgs boson first became known to the general public in 2012, physicists filled the last missing piece of the Standard Model – the theory of the fundamental constituents of matter. But physicists still want to learn more about the inner workings of this boson.

The standard model makes predictions about how often the Higgs should disintegrate into different types of particles. The beautiful quarks are one of six types of quarks in the Standard Model, each of which has different properties, such as mass and electric charge. While the lightest quarks constitute common particles, like protons and neutrons, the beautiful quarks are relatively heavy and rare.

Physicists want to measure the different ways the Higgs boson disintegrates to see if they match the predicted models. If not, it could mean a mistake in theory. However, up to now, all new results confirm the Standard Model.