Physicists have described the behavior of matter inside black holes 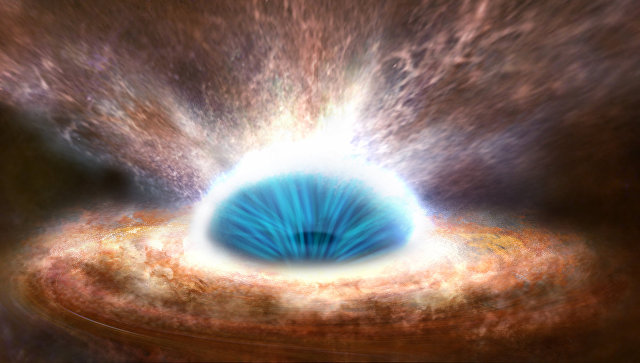 Physicists from the Steklov Institute of Mathematics of the Russian Academy of Sciences have developed a theoretical description of the behavior of matter inside black holes and have found a possible way to reconcile quantum physics and the theory of gravitation.

“We used an approach based on the holographic principle: the quantum two-dimensional system that” lives “on the boundary of a special curved 3D space called the anti-de Sitter space can be described within it by classical gravitational physics. , the three-dimensional space, together with everything that happens inside, plays the role of a hologram that illustrates what is happening directly in our physical system, “said Mikhail Khramtsov from the Mathematical Institute, whose words dit press service of the Russian Science Foundation.

Ordinary and supermassive black holes have such a strong attraction that it can not be overcome without exceeding the speed of light. No objects or radiation can escape from the impact of the black hole, which is called the “event horizon”.

What happens beyond the horizon of events remains a mystery and subject of controversy among physicists. Most scientists believe that in principle it is impossible to look inside the black hole and to study its structure, since this will lead to extremely unpleasant consequences – in this case it will be impossible to reconcile Einstein’s theory of relativity and quantum mechanics.

Nevertheless, black holes exist, and their behavior needs to be described somehow. More recently, scientists began to believe that black holes are not actually three-dimensional, but two-dimensional objects – peculiar cosmic “holograms”, where the space contracts closer to the edges and where the object thrown in a straight line returns to the point where the flight begins.

This theory and the equations describing it were put forward in the late 1990s by two well-known cosmologists: Juan Maldasena of Princeton University and Gerard ‘t Hooft of the University of Utrecht. As some scientists believe, similar principles can describe the entire universe as a whole – in other words, it is entirely possible that we live inside a flat two-dimensional hologram.

Based on these principles, Khramtsov and his colleagues tried to explain why the very fact of the existence of black holes does not violate the laws of thermodynamics, and also describe the quantum processes that are responsible for the transport of heat within them, on the basis of the theory of relativity and other classical laws of physics.

As calculations have shown, in a black hole a certain analog of thermodynamic equilibrium can indeed be observed, as in a “normal” universe. To check this, as scientists emphasize, it is possible experimentally, by colliding particles cooled to temperatures close to absolute zero.

If such particles fall into magnetic traps, then when they are irradiated by a laser, they behave approximately the same as matter in flat black holes. In particular, information about the appearance of new quantum bonds between particles will propagate inside the trap at a certain rate, and deviations from it will mean that the calculations of Russian physicists are not entirely correct.

As noted by Khramtsov, quark-gluon plasma arising inside the LHC or the RHIC collider in Brookhaven (USA) can similarly be heated, which allows using the same principles to describe its behavior and further study. According to him, in the near future, Russian physicists will try to find an answer to another important issue related to black holes: whether information is lost when matter passes through the horizon of events.