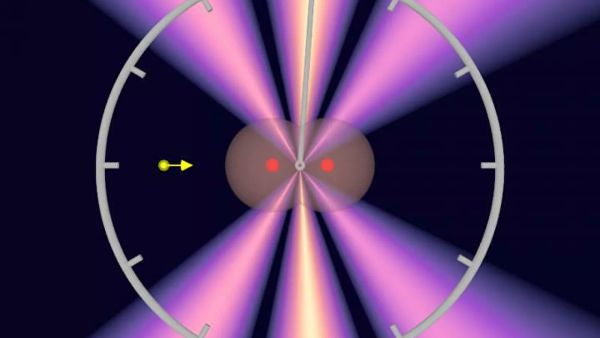 For the first time, German scientists measured how long it takes for a photon to cross a hydrogen molecule. This is the shortest time span that has been successfully measured to date. The research results are published in the journal Science.

In 1999, Egyptian chemist Ahmed Zewail received the Nobel Prize for measuring the rate at which molecules change their shape. To estimate the rate of formation and breaking of chemical bonds, he used ultrashort laser flashes in the femtosecond range – 10-15 seconds.

Atomic physicists from Germany, led by Professor Reinhard Dörner of the Goethe University in Frankfurt, first studied the propagation of light in a molecule, which is shorter than femtoseconds in time.

Researchers irradiated a hydrogen molecule H2 with PETRA III X-ray laser beams at the DESY accelerator facility in Hamburg. They set the energy of the X-rays to such a level that one photon was enough to eject both electrons from the hydrogen molecule.

Electrons behave like particles and waves at the same time, and therefore the release of the first electron led to the launch of electron waves, first in one and then in the second atom of the hydrogen molecule.

After the passage of the photon through the molecule, the interference pattern of the waves shifted slightly, which allowed scientists to calculate how long it takes for a photon to travel from one hydrogen atom to another – 247 zeptoseconds, 10-21 seconds. Never before have physicists been able to measure the duration of so many short events.

Scientists compare a photon to a flat rock that is launched across the surface of the water. When it touches the surface twice, it causes the formation of first one and then a second wave, which, diverging, begin to superimpose one on another.

The authors measured the interference shift of the first electron using the COLTRIMS reaction microscope developed at Goethe University, which makes visible ultrafast reactions in atoms and molecules.

Simultaneously with the interference pattern, the microscope made it possible to determine the orientation of the hydrogen molecule, due to the fact that the hydrogen nuclei left without electrons scattered to the sides and were found.

“Knowing the spatial orientation of the hydrogen molecule, we used the interference of two electron waves to accurately calculate when the photon reached the first and second hydrogen atoms,” the first author of the article, Sven Grundmann, quoted in a university press release.

“We noticed for the first time that the electron shell in a molecule does not respond to light simultaneously and everywhere. Due to the fact that information inside the molecule travels at the speed of light, there is a time delay,” adds Dörner.

Scientists plan to expand the COLTRIMS technology in the future and use it to study other ultrashort events at the molecular level.