Physicists have substantiated the existence of wormholes in space-time 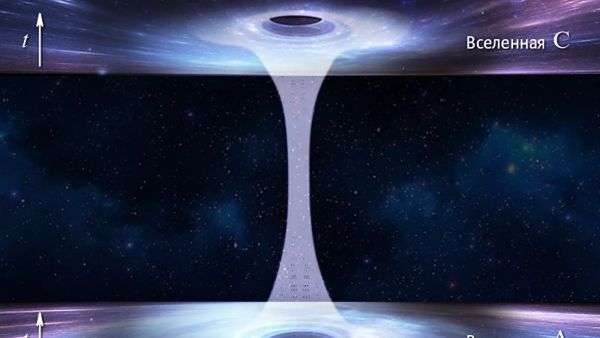 Scientists from Spain, Germany and Portugal have created a theoretical model of a wormhole – a supposed tunnel in space-time – that does not require an exotic state of matter for its existence. And American physicists have determined what parameters this hypothetical structure should have in order for a person to pass through it. The research results are published in the journals Physical Review Letters and Physical Review D.

The concept of a wormhole, or wormhole (literal translation of the English wormhole) was introduced into physics by the American scientist John Archibald Wheeler. Traditionally, it is represented as a hole, or a three-dimensional pipe, connecting a curved two-dimensional space. Through such a tube, you can move from one part of the galaxy to another in seconds, travel in time or between parallel universes.

The existence of a tunnel in space-time does not contradict general relativity, but if it existed, the gravitational attraction of matter inside it, according to scientists, would cause the throat to collapse at the narrowest point, preventing the wormhole from moving from one side to the other.

Therefore, as a necessary condition for the passage of a wormhole, physics suggests filling it with some exotic matter with negative energy density, which creates a strong gravitational repulsion and prevents the burrow from collapsing. Exotic matter is understood as any hypothetical substance that violates one or more classical conditions or does not consist of known baryons.

Such substances can have such qualities as negative energy density, and repel rather than attract due to gravity. Since the laws of existence of exotic matter are unknown, such wormholes cannot be described using the equations of classical physics.

Researchers led by Jose Blázquez-Salcedo of the Complutense University of Madrid were the first to describe a traversable wormhole without invoking exotic substances using the relativistically invariant Einstein-Dirac-Maxwell equations for point fermions with spin ½ electrons, such as … Scientists consider the matter in it as a set of common fermions that have quantum wave functions and interact through classical electromagnetic fields.

By varying parameters such as the charge and mass of fermions, the authors found that traversable wormholes can exist when the ratio of the total charge to the total mass inside it exceeds the theoretical limit applicable to black holes. But the wormholes that the scientists modeled turned out to be microscopic, too small for a person to squeeze through.

American physicists Juan Maldacena of the Institute for Advanced Study in New Jersey and Alexey Milekhin of Princeton University have built a model of a wormhole that can be traversed by humans.

They took as a basis not the Standard Model of physics, but the Randall-Sundrum model, which uses the apparatus of string theory and describes the world from the point of view of a deformed five-dimensional space-time. This allowed scientists to find solutions in which the wormholes are large enough for humans to walk through and survive.

According to the authors, outwardly they resemble charged black holes of intermediate mass. Their large size is due to the requirement that the traveler can survive the tidal forces, since he, passing through the center of the wormhole, acquires a very large acceleration. In theory, through such a wormhole, a person can travel through the galaxy in less than a second. But for an outside observer, this time will be thousands of years.

The researchers note that they did not consider the probable mechanism and conditions for the formation of such transitions, but only substantiated the possibility of their description by allowed equations.