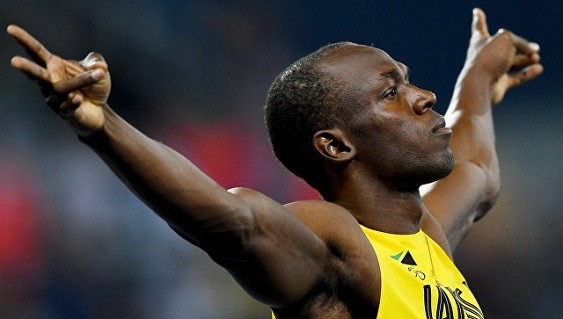 The British scientists found out how strongly light slows down the run in the neighborhood of Usain Bolt when that begins the running start and reaches record-breaking high speeds allowing it to win constantly at the Olympic Games.

The same object which moves in our direction or from us with rather high speed will seem us the Austrian physicist Christiaan Doppler painted in different colors thanks to effect of compression and extension of waves, opened in 1842. Because of this effect, so-called Doppler shift, a star and objects which move in our direction, the galaxies which are moving away from us and stars – more red seem to us more blue, and. The same effect influences also other types of fluctuations, including a sound, a roentgen or ultraviolet.

Benjamin Griffiths from the Leicester university (Great Britain) and his colleagues became interested whether Usain Bolt, the most bystry person on Earth can, disperse to such speeds at which his well-known yellow jersey would change the color and would become more “blue” at its driving towards the camera, and more “red” – when driving from it.

For carrying out similar calculations scientists took the data on acceleration and traveling speed of the Bolt which are written down by the International association of federations of athletics during the runnings at one of the last summer Olympic Games. To make calculations more prime, Griffits and his colleagues calculated values of red and blue removal of the Jamaican athlete for each 20 meters which flew by Bolte during jog on a 100-meter distance.

It was important for the reason that Bolte constantly accelerated and there passed each such segment with more and more high speed – it spent for the first 20 meters about 2,8 seconds, and ran the last in only 1,61-1,66 seconds, having reached speed in 43 kilometers per hour.

Similar speed, by calculations of authors of article, corresponds to Doppler shift in 24 femtometr (ten in minus of the fifteenth degree of meter). For comparison, the typical wavelength for beams of yellow light makes 580 nanometers that in about 25 million times more, than similar red or blue shift.

As scientists note, a human eye can see shifts of waves in this or that party approximately on one nanometer, and value in 24 femtometr appears approximately in 40 thousand times less than this index. Therefore it is possible to say that the audience and judges can hardly notice changes in color of the Bolt undershirt though highly sensitive photodetectors can probably notice these shifts.

In order that all this occurred, the Bolt should disperse to fantastic speed in 1,86 million kilometers per hour. With approximately same speed the solar wind moves that is unattainable even for the bystrykh of spaceships and other man-made objects.

The faculty of physics and astronomy of university of Leicester (Great Britain) annually publishes the scientific magazine Physics Special Topics which authors and editors are fourth-year students of faculty. All articles sent to the magazine undergo obligatory reviewing, and participation in its work is estimated by teachers and it is necessary for obtaining the diploma.

At the same time the beginning British scientists are interested in an unusual circle of subjects. For example, in 2013 they found out whether it is possible to heat the room heat developed by members of the British parliament during the intense discussions and also proved that Jack Sparrow and Will Turner, to characters of “Pirates of the Caribbean Sea” who in the movie go under water, breathing air under the inverted boat, would have enough oxygen for the whole three hours. Last year they were interested in properties of Jedi swords, a possibility of a downing of the asteroid which ruined dinosaurs, the laser and some other fantastic scenarios.