Plants have found a system of communication through the roots 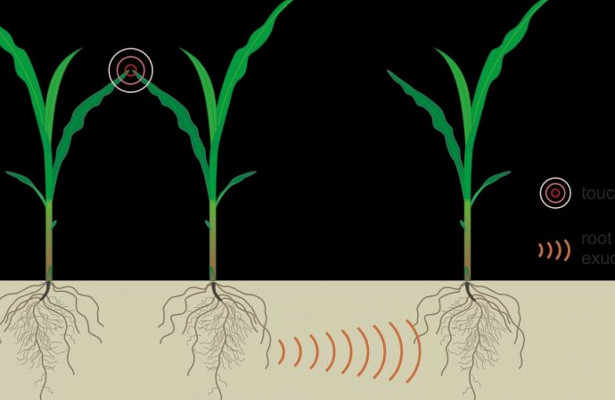 Plants don’t like being touched all the time. For these immobile organisms, touch usually means too close proximity to another plant — and the upcoming competition with it for sunlight. But they are able to exchange signals through the root system, changing the nature of the growth of neighbors. About this Velemir Ninkovic (Velemir Ninkovic) and his colleagues from the Swedish University of agricultural Sciences write in an article published in the journal PLoS one.

Biologists experimented with young sprouts of common maize, which were grown in hydroponic conditions, without soil — on an aqueous solution containing all the necessary minerals. These sprouts are sensitive to touch: mechanical stimulation caused them to emit signaling substances into the water. And if the next plant was cultivated on the same solution, it grew more leaves and less roots.

The plant seemed to “feel” the presence of neighbors and directed a lot of resources to defeat them in the competition for light. If the sprout had access to two solutions at the same time (one left after the “touched” plant, and the other — from the “untouched), he obviously distinguished them, and the root actively stretched to the second.

According to the authors, the chemical communication of sprouts through the soil can be especially important for the seeds of the parent plant, allowing them to better “share” the available space and compete less with each other for light. “Aerial communication between plants can cause a response in neighbouring intact plants through the subsurface communications, the scientists write. “This shows that the development of plants can change significantly due to the physical conditions in which their neighbors grow.“