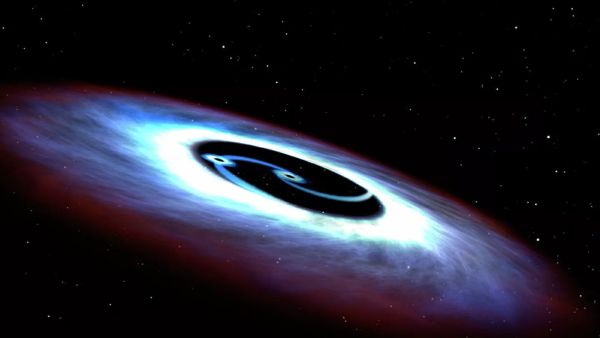 For the first time, an international group of researchers from the University of Osaka (Japan), the National Research Nuclear University MEPhI (Russia) and the University of Bordeaux (France) received a plasma identical to the matter from the vicinity of the black hole. The results are published in the journal Physical Review E.

Analysis of X-ray radiation from space objects is one of the most important methods of astrophysics. One of the cosmic sources of strong X-ray radiation, as explained by scientists at the National Research Nuclear University MEPhI (NRNU MEPhI), are accretion disks of black holes, which are matter falling onto the hole and heated to a plasma state.

A small volume of plasma with characteristics identical to the matter of the accretion disk of a black hole was for the first time managed to be recreated in the laboratory by an international team of scientists, which included specialists from NRNU MEPhI.

“Astrophysics has long been considered the lot of observers, since it seemed, to put it mildly, difficult to influence the phenomena it studies, or even more so to reproduce them. The uniqueness of our experiment is that the parameters of the obtained plasma do not need to be scaled, they correspond to the actual parameters of the plasma in the vicinity of a black hole close of double systems of the Cygnus X-1 type “, – noted Philip Korneev, associate professor of the Institute of Laser and Plasma Technologies of NRNU MEPhI.

The key factor in the formation of X-ray sources of this type, according to scientists, is a strong magnetic field, the induction of which reaches several thousand Tesla. The purpose of the experiment was to test the method for creating such magnetic fields in plasma, developed jointly by scientists from the LaPlaz Institute of the National Research Nuclear University MEPhI and the CELIA laboratory at the University of Bordeaux.

“Experience has shown that our method allows not only creating ultrahigh quasi-stationary magnetic fields of record magnitude, but also simulating the state of the plasma arising in them with a high energy density of matter and electromagnetic energy, which is in demand by modern laboratory astrophysics,” said Korneev.

The idea of ​​the method, according to scientists, is based on the effect of reflection of a powerful laser beam along the spiral inner surface of the target. A rolled-up piece of thin foil several hundred microns in diameter was used as a target. A laser pulse with an energy of about 330 Joules and a duration of one picosecond was almost completely absorbed in the target cavity, creating a relativistic plasma inside and a magnetic field with an induction of more than 2 thousand Tesla.

“Due to the fact that a rather powerful laser was focused on a target with such a short duration, only 10-12 seconds, the pulse power turned out to be about 20 times higher than the power consumption of the entire energy of the Earth. As a result, a plasma with a temperature of billions of degrees, a density of 1018 particles per cm3 and a frozen-in magnetic field of more than 2000 Tesla, which corresponds to the plasma parameters in the active region of X-ray sources, “explained Philip Korneev.

The resulting volume of hot, highly magnetized plasma was large enough to have the essential characteristics of a complete astrophysical system, the scientists said. According to them, this was facilitated by the geometry of the experiment: inside the plasma volume, the magnetic fields were directed towards each other so that in the area of ​​contact of the opposing magnetic lines, the annihilation of the magnetic field took place, leading to the appearance of particle streams with speeds close to the speed of light.

The new method of creating superstrong magnetic fields, as explained by the scientists of NRNU MEPhI, will also allow in the future to improve the technique for creating directed particle beams, making it more accurate and powerful. Such devices are widely used in experimental science, medicine, and security systems.