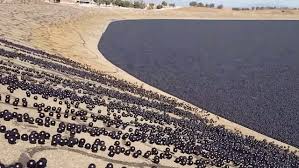 A year after the start of the experiment with the balls placed in the reservoir of Los Angeles for cooling and water conservation, Department of water resources said that the initiative was successful.

Last August, authorities in Los Angeles decided to launch an additional 20 thousand balls in the reservoir, bringing the number to 96 million. 36-cent plastic balls designed to prevent the penetration of sunlight, inhibiting the chemical reaction caused by the algae bloom. As the head of the operations Department of the Department of water and energy of Los Angeles, the office of which is located reservoir, Richard Harasek the design with the balls can be called successful.

Update of the tank will cost the Department $ 300 million, and the cost of balls — 34.5 million dollars.

The beads are designed to absorb sunlight, and especially ultraviolet rays. Blocking ultraviolet radiation from penetrating into the water can prevent a chemical reaction between the natural bromide and chlorine, which is added to water as a disinfectant. Under ultraviolet radiation, these two chemicals combine, resulting in the formation of broad — a substance that causes cancer. In addition, the blocking of sunlight, in General, also reduces the rate of growth of algae and reduces the amount of evaporation of water,” explained analyst Scott Sutherland.

At the same time, failed to know how much water saved throughout the year until the balls were in the tank. According to some estimates, managed to keep from evaporation of 300 million gallons (1.1 billion liters) of water.

This is enough to provide drinking water to 8100 people. This was told by city Council member Mitchell an Englander: “While the drought holds, it is very important focus on finding innovative solutions to maintain high quality drinking water for our four million residents.”

California is experiencing an unprecedented period of drought. And half of the territory of the state the situation is in the status of “exceptional drought”. Almost 37 million people affected by these phenomena.