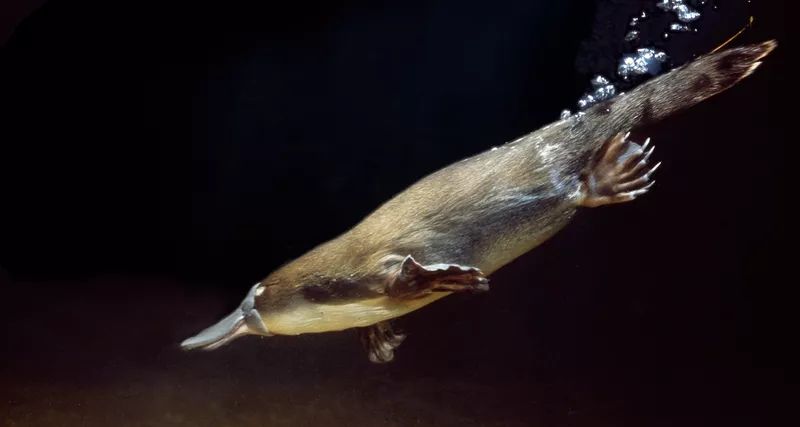 The platypus is nature’s crazy patchwork quilt. This strange creature looks like half a dozen different animals in one body. It turns out that all this time they were hiding another curious secret from us: the ability to glow in the dark!

It’s not enough just to be a mammal that lays eggs, wears a duck beak and webbed feet, hunts using electroreception and wields poisonous spurs – now platypuses have also found the ability to glow

The platypus is now part of a true elite club, as it is one of three biofluorescent mammals known to science. The other two are possums and flying squirrels. In addition, the platypus stands out as the only known egg-laying mammal (other than the echidna). By themselves, by the way, biofluorescence and bioluminescence are found in the wild ubiquitous in many other organisms, such as fungi, fish, phytoplankton, reptiles, amphibians and at least one species of tardigrades.

The same team that was involved in the new study led by Northland College biologist Paula Speth Anich discovered biofluorescence in flying squirrels last year. The find happened by chance, during a night survey of lichens. Later field observations were confirmed by specimens of flying squirrels kept in the museum. Details of this unexpected discovery have been published in the scientific journal Mammalia.

With this in mind, scientists decided to try their luck with yet another nocturnal mammal. Platypuses, like flying squirrels (and possums), are active in the wee hours, at dusk and at night. For the new study, the team analyzed three museum specimens of the platypus (two males and one female).

Platypus fur appears brown in visible light, but new research shows that it actually glows green or blue in the UV spectrum. It absorbs ultraviolet wavelengths from 200 to 400 nanometers and then emits visible light from 500 to 600 nanometers – this optical process leads to fluorescence.

Researchers “are confident that the observed fluorescence is not an indication of exclusively museum specimens” and applies to all platypuses – but this remains to be proved.

Why do animals need such an interesting feature? Scientists speculate that the biofluorescence of the platypus is likely an adaptation to low light conditions. Glowing fur can be a way to distinguish one another at night, making it easier to recognize individuals of the same species.

The find is also interesting from an evolutionary point of view. Marsupials and placental mammals (eutherians) separated from a common ancestor about 150 million years ago, when it came to the end of the Triassic. The descendants of this evolutionary “divorce” had to fight their way through the subsequent Jurassic and Cretaceous periods, not to mention the mass extinction that wiped out all non-avian dinosaurs. And this is a lot of time for evolution and adaptation.

If three completely different groups of mammals have retained this trait after 150 million years, this means that the genes responsible for biofluorescent fur are highly “conserved” in the language of biologists. However, there is another reasonable explanation: these three species – possum, flying squirrel, and platypus – acquired glowing fur independently, as a result of the so-called convergent evolution. Good ideas are highly prized in nature, so similarities can often be seen in unrelated species.