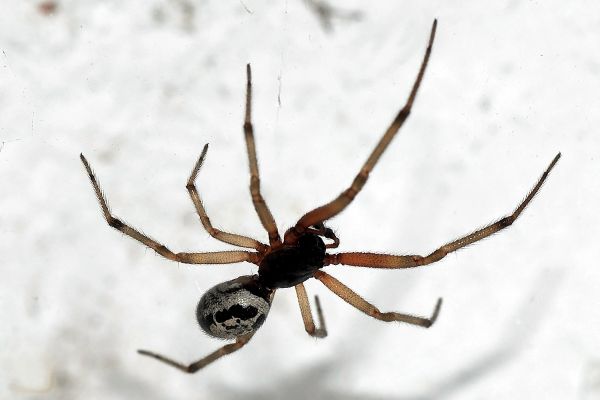 Due to their physical resemblance to the famous and dangerous black widows, Steatoda spiders are often confused with them and called “false widows”. However, they are dangerous in and of themselves: the bites of some steatodes cause severe pain and abscesses. This also applies to the noble steatode – a species that is especially important for us. Initially, these poisonous spiders lived exclusively on islands off the coast of Africa, but at the end of the 18th century they ended up in Great Britain, where they were brought with merchant ships. Here they settled down, entrenched themselves – and now they have turned into an invasive species. Now Steatoda nobilis is found in continental Europe, as well as in North and South America.

The venom of noble steatodes contains a cocktail of neurotoxins and lytic enzymes, with the help of which spiders immobilize their prey and immediately begin to digest it. Fortunately, this poison is not enough for a person and the pain usually goes away after several hours of torment. However, John Dunbar and colleagues from the UK and Ireland have found that steatode bites can have more distant and dangerous consequences.

In an article published in the journal Scientific Reports, scientists report that another “secret ingredient” has been found in S. nobilis venom – a brood of bacteria, many of which can cause disease and are also resistant to antibiotics. It is not surprising that in the same Great Britain every now and then there are reports of how a usually completely harmless bite ended up for the victim with severe necrosis, amputation, and even death.

Scientists have caught “false widows”, as well as endemic spiders in Great Britain, having found traces of the presence of bacteria from 11 different genera. 22 types of microbes were found on the steatodes, 12 of which can cause infections – such as staphylococci and pseudomonas. The authors showed that three of them (Pseudomonas putida, Staphylococcus capitis, and S. edaphicus) show resistance to antibiotics of different classes. Fortunately, they all succumbed to the effects of ciprofloxacin – at least until they became resistant to it.

Until now, many experts doubted that with the bite of the “false widow” you can get an infection. After all, the venom of these spiders contains digestive enzymes that may well keep their poisonous apparatus sterile. However, this does not seem to be enough, and each bite should be treated carefully. In addition, it remains to be seen what role spiders may play in the spread of multi-resistant bacteria, which are considered one of the most serious threats to humanity today.