Polish archaeologists stumbled upon the remains of mysterious structures 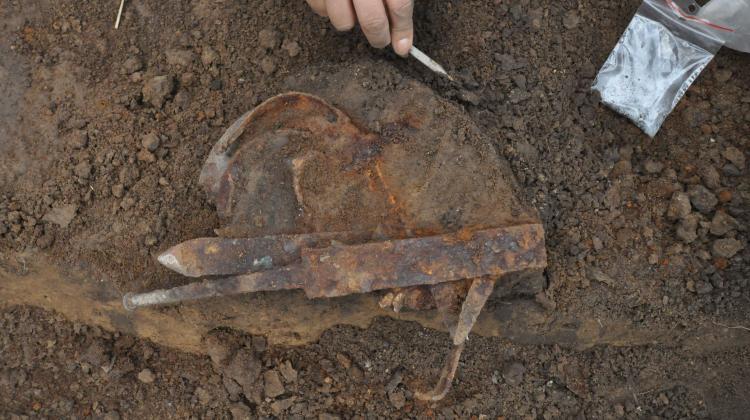 During archaeological excavations near the village of Beisce in Kazimierz County, Polish archaeologists discovered a large military cemetery about 2000 years old, in which mysterious triangular objects of unknown purpose were found.

Science in Poland talks about the discovery. Ancient military burials were found by archaeologists in the territory of Свwiętokrzyskie Voivodeship. The area of ​​this cemetery is about one hectare. It was discovered on a field that has been used for agricultural work for many years.

This is probably why many burial sites were damaged. In graves about 2000 years old, urns with the ashes of cremated warriors were discovered. The fact that they were warriors is indicated by objects discovered there, in particular weapons: iron swords, spearheads and arrows.

In addition, during excavations, archaeologists stumbled upon the remains of mysterious structures. They have a square perimeter, but go deep into the shape of a triangular gutter, that is, their cross section is of a regular triangular shape. Similar objects were previously found in other cemeteries of the same period in southern Poland.

“However, their purpose has not yet been established,” says Jan Bulas, head of the research project from the Institute of Archeology of the Jagiellonian University. “In Beisz, fragments of ceramic vessels and metal objects were found in such structures. It is interesting that all these objects are strictly oriented to the cardinal points” .

According to him, the study is still in its infancy. Many graves are destroyed, and they are often located at a great distance from each other. However, excavation results indicate a high density of burials. So, at least 20 graves were discovered on an area of ​​200 square meters. Moreover, their number may increase, since objects raised from the ground are still at the identification stage.

“The heavily rusted and seemingly shapeless objects turned out to be fragments of swords or iron brooches,” says Jan Bulas. “During the first season of excavation, we managed to find a total of four swords. For comparison, only two swords of this period have been found so far – in the necropolis the neighboring settlement of Mihajlovice. Meanwhile, our research is just beginning. ”

According to him, nine spearheads or darts were also found. In total, archaeologists discovered about 200 various metal artifacts and their fragments, as well as products from bone, stone and clay.