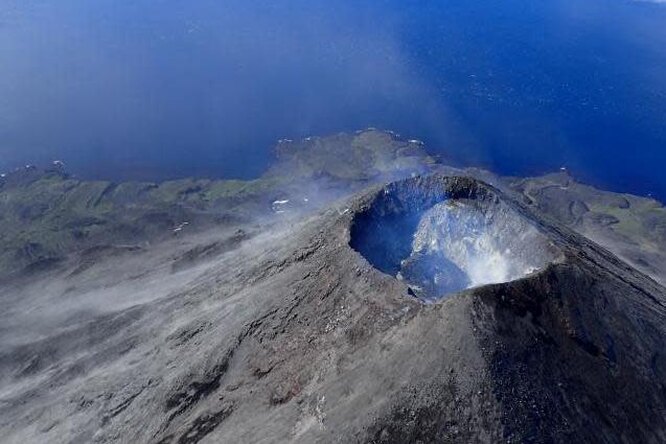 At the end of 2020, the planet presented us with another frightening surprise. Geologists have every reason to suspect that the Alaska group of islands is in fact part of an interconnected volcanic system of the same type found in Yellowstone National Park.

Geologists said that a huge underground supervolcano may be hiding in Alaska, which was discovered only recently.

A volcanic archipelago called the Four Mountain Islands is located along the Aleutian island chain. A new study by John Power of the US Geological Survey at the Alaska Observatory has provided evidence for a “large, previously unidentified caldera” in the region.

The cluster consists of six closely spaced stratovolcanoes: Cleveland, Carlisle, Herbert, Cagamil, Tana, and Uliaga. Stratovolcanoes are volcanoes in their “classical” representation: high steep mountains crowned with a smoking cone. The area around them is also interspersed with many smaller cones and cracks. Of the six mountains, Cleveland has been the most active over the past two decades, producing ash clouds reaching heights of 4.5 to 10 kilometers.

The putative caldera has eluded discovery for so long because it is obscured by relatively recent sediments and the ocean. Geologists have had a hard time gathering evidence for their theory. According to Diana Roman, study co-author and geologist at the Carnegie Institute of Science in Washington, the evidence was collected by analyzing a variety of data: the composition of geologic deposits, changes in the region over time, gas emissions, and gravity measurements that indicate rock density.

Calderas are giant underground chambers filled with magma. They caused some of the most catastrophic eruptions in the history of our planet. Against their background, the eruptions of stratovolcanoes are accompanied by tiny foci of magma outlet. It is for this reason that underground calderas are often called supervolcanoes.

The Yellowstone Caldera has become one of the most famous for its size and potential danger. If it begins to erupt, it will shed hot lava over an area of ​​48 to 64 km. Such eruptions can also lead to the formation of abundant amounts of ash that can change the climate both in a particular region and around the world. According to the US Geological Survey, the wind-carried suspension of sulfur and light ash particles will spread throughout the planet and likely cause “a noticeable decrease in temperature on Earth.”

A possible caldera in Alaska is not so dangerous – after all, there are many supervolcanoes in the world that have been dormant for tens of thousands of years. However, this is potentially a very serious discovery. According to AGU, the giant interconnected system of volcanoes could cause “serious global troubles” in the future.