Prophetic visions of the future of the world 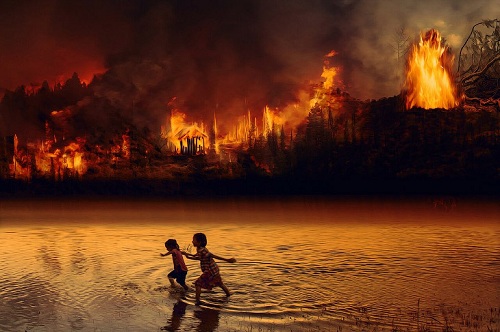 You know, I have always been interested in questions related to prophetic visions. I have studied this issue quite closely and many of the predictions made by people who have received them in some “lapses of consciousness” or in dreams are really coming true. I will describe here my vision, which did not come in a dream, but in such a “failure” when dream and reality are mixed together.

I am standing on a small hill near the highway. The yellow sky is covered with a smoky veil, the same yellow color as everything around. I noticed that everything was covered with this yellow dust. Small, covering literally everything.

The wide highway has the same yellow tint because of this dust. There used to be forest belts along it, but only dried skeletons devoid of leaves remained of the trees. In the distance, through a yellow veil, high-rise buildings could be seen, some kind of big city.

On one side of the highway, to the left, not far from the road, on an equal section clearly prepared with the use of technology, there were even rows of white tents. There were blue barrels of water and power generators. There were many stacked boxes, most likely with food and medicine.

But, it seemed that since the creation of this field hospital (and it was he) no one had ever used it. Many of the tents were blown apart by the wind and inside were rows of couches covered with white sheets.

I noticed that there were practically no sounds. There were no cries of birds, no noise of cars, nothing at all, except perhaps a slight rustle of the wind.

In the distance, a group of people wandering along the road appeared from the yellow darkness. They walked from the direction of the city. Tired, dirty, many were injured. Men, women, children. They did not walk in an organized way, but wandered in a motley mass.

When this crowd reached the tents, they rushed there in search of water and food. No organization, just a maddened mass crushing everything in search of food and water. But in the midst of this madness, otherwise it is impossible to describe it, because the first to rush to food and water are those who were stronger, scattering women and children, very close behind the dried rows of trees, a strange sound was heard.

As if something was approaching here, it was the sound of hooves and the dull sound of heavy breathing. People heard this and panic seized them. Screams, screams, crying. They rushed about among the tents, and through the remnants of a dry forest belt, breaking tree trunks and crushing the remains of bushes, a wave of various animals rushed across the highway.

There were horses, cows, wolves, foxes, moose, wild boars, some small animals and even hares. All this mass crossed the highway and attacked people. As in some kind of bloody kaleidoscope, I saw how an ordinary cow grabbed a woman by the hand and in one movement pulled her out of her forearm. It all ended very quickly.

The animals, having killed people, began to devour them. And even herbivores did it. I got the impression that this behavior of animals for people who fled from the city was already familiar, since they reacted to the very sound of approaching animals without ever seeing them.

Then the passage of time increased. I also stood in the same place, day changed to night and everything happened in an accelerated mode. I saw the sky getting darker and yellower with the increasing yellow smog. Like a highway, covered with dunes of yellow dust.

And then, from the same side where people once came, a group of strange creatures appeared. There were 11 of them. They were dressed in white cloaks with hoods. They walked at a steady pace, without stooping. Strange, as if the mannequins came to life.

When they reached the place where the remains of the tents of the field hospital and the swollen and decomposing corpses of animals and people were visible, the one walking in front bent down without stopping, reached out, grabbed the woman’s corpse lying on the road by the hand and pulled it out in one motion and brought it to his mouth.

Strange, but I cannot call them human. The cloak hid the legs, arms and heads. Yes, they looked like humanoids, possibly people, but there was something unusual and strange about them.

And while I thought about it, watching them disappear into a yellow fog, devouring the torn parts of human bodies on the way, it became clear to me who they are – DIFFERENT.

Then time accelerated again and the sky grew darker and became not just yellow, but almost blood red. Hurricanes replaced tornado columns. It never rained. There was no lightning. Only gusts of wind and columns of dusty tornadoes.

Almost nothing remained of the field hospital. The corpses of people and animals had long been decomposed and only bones and ribs were visible sticking out from under the yellow dust that had covered everything around. And then a black wall appeared in the distance in a yellow fog, it approached, closer and closer, and I realized that it was a giant tsunami wave.

Apparently, this was the end of the history of modern human civilization. It has already been and it will be – THE GREAT FLOOD.

Cleansing the Earth from filth, renewing it and starting a new round of development of the NEW WORLD.