Psychologists have learned to identify the personality on “a brain print” 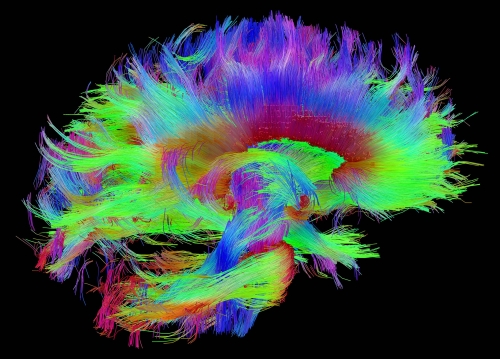 Networks of interrelations between neurons, the patterns operating in our brain at everyone are unique and unique. Scientists managed to shoot a picture of such patterns and to identify volunteers on these “prints” with a 100 percent accuracy.

That connection – set of neural patterns – each brain it is unique there is nothing new. These incredibly complex networks are responsible for everything, than the brain is occupied, beginning from breath and finishing with emergence of consciousness. Scientists make many efforts for full mapping of all communications in a konnektoma, but so far this task lies outside our opportunities. As a rule, such works are limited to more rough picture of interrelations between certain sites of a brain, but not neurons.

Professor of University Carnegie is Mellon to Timothy Verstaynen (Timothy Verstynen) and its colleagues worked nevertheless with accuracy “to neuron”, having limited observations of MRT by the small site of white substance at the surface of a brain. Data on a brain of 699 volunteers have been in total considered, having made such “prints of a brain” for each case. Subsequently scientists have carried out from experimental more than 17 thousand sessions of identification, receiving pictures of MRT and after comparison to the previous data defining their personality. By data, which they provide in the PLOS Computational Biology magazine, accuracy was absolute.

“It confirms what we in neurosciences always knew, – Verstaynen says, – that patterns of communications in your brain – they are unique”. The scientist adds that in many respects they are defined by heredity, but a key role in formation of a unique picture of interrelations between cells of a brain is played by individual development and personal experience therefore even at monoovular twins no more than 12 percent of neural patterns are identical.