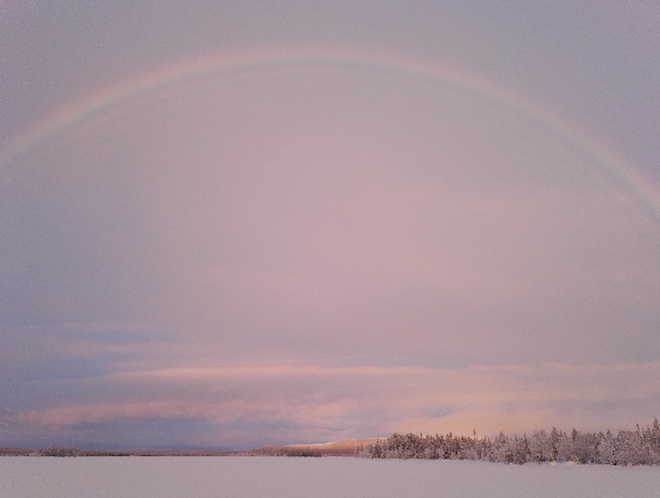 To form a rainbow, liquid water is usually required. Drops falling from the sky intercept the rays of sunlight, reflecting them in the colorful splashes of red, green and blue. The other day a resident of Finland, Valtteri Immonen, observed such a rainbow over the city of Muonio. But something was missing.

“It was -6 ° C outside, with no rain, no snow, but there was a huge rainbow in the sky,” says Immonen. “I’ve never seen a rainbow in winter, and I did not even know it was possible.”

According to the expert on atmospheric optics Le Cowley, raindrops should have been present. “The appearance of the rainbow, narrow and supercompact, indicates that it was formed by drops of water of moderate size, possibly with a diameter of about 0.5 mm. I suppose that there were high-level deposits that could not reach the ground. Drops could also subcool below the freezing point of water, “the scientist explained.

Supercooled droplets can form when droplets of liquid water pass through layers of air below the freezing point. Drops containing dust particles or even microbes easily freeze when ice crystals form around impurities. But when raindrops are particularly clean, they can remain in the liquid state even at minus temperatures.