Rainwater can be bactericidal. 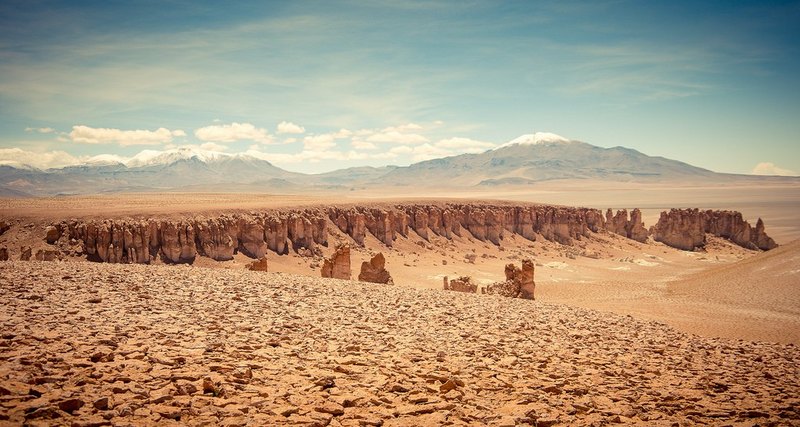 Atacama Desert, located in the north of Chile, very close to the Pacific coast, is deservedly considered one of the harshest places on the planet. The movement of air flow in this area is arranged so that in Atacama there is almost no precipitation. Their annual amount ranges from zero to fifty millimeters. In most of the territory of the Atacama, there was no rain for all the time of reliable observations, that is, somewhere for a century and a half. It is very likely that they were not there before, at least since the arrival of the Spaniards at the end of the XVI century. Moreover, geologists claim that there was no significant precipitation for tens or even hundreds of thousands of years.

The region has a arid climate of the last 150 million years and a very dry 15 million years. The Andes are very close, but there is no snow on those mountains that are adjacent to the Atacama, although the mountains are high (6885 meters) and the temperature on their tops is negative. But, for the formation of snow cover, the air must be humid, and it is dry.

In short, Atacama deservedly enjoys the fame of the driest place on earth. But the XXI century introduced its own corrections to this status. In the past three years, in Atacama, almost for the first time since the time of mastodons, full rain has come. This unusual phenomenon for those places was registered in the central part of the Atacama on March 25 and August 9, 2015, and later on June 7, 2017.

The effect of rain on the desert-dwelling biocenosis habitual to drought is described in an article by a group of Spanish scientists published in Scientific Reports. It would seem that water is almost a synonym for life. But it turned out that the desert microbes that are unaccustomed to such happiness, are able to thrive in the almost complete absence of moisture, with its excess, are massively killed by the osmotic shock caused by exposure to the environment unusual for microbes.

“Our work shows that high rainfall caused the mass extinction of most species of local microbes. The extinction range reaches 85 percent as a result of osmotic shock caused by the abundance of water: autochthonous microorganisms that were perfectly adapted to extreme dryness and had strategies optimized to use the poor environmental humidity could not adapt to new conditions of sudden flooding and died from excess water. ” – says Alberto Feiren, one of the authors of the study.