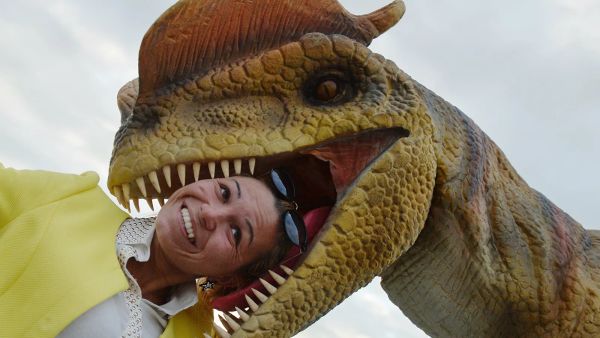 American paleontologists have recreated the appearance of Dilophosaurus. It turned out that he is very different from the small carnivorous dinosaur from the movie “Jurassic Park”, primarily in that it is much larger. Article published in Scientific American.

Many of the dinosaurs featured in the film are based on reconstructions by paleontologists. Scientists believe that the only major departure from scientific credibility is Dilophosaurus.

The filmmakers portrayed this dinosaur as short, only 1.2 meters high, with a leather hood around the neck, which opened and vibrated like a frilled lizard.

In the nearly three decades since the release of the cult film, researchers have discovered many new fossil specimens of this dinosaur, as well as analyzed previously available using more advanced methods.

The findings show that the real Dilophosaurus was six to seven meters long – twice as long as in the movies – with two characteristic parallel ridges of very thin bone at the crown.

The authors of the film and the book, which formed its basis, did not confirm the assumption that Dilophosaurus had leather frills around its neck, like modern agamid lizards living in Australia and New Guinea, and could spit out deadly poison at a distance of up to two meters in order to hit its victims. Paleontologists have not found any anatomical evidence of this.

Recent studies of skull features have identified strong ridges for muscle attachment in the bones of the animal’s mandible. In modern reptiles, these ridges serve to attach the chewing muscles. The bones of the upper jaw also turned out to be much more massive than previously thought.

With a large skull and such strong jaws, Dilophosaurus had no need to spit poisonous saliva. He was a dangerous predator with a deadly bite and, according to the authors of the article, “would have easily eaten his cinematic version for breakfast.” In addition, he was larger than many of his contemporaries. The researchers note that most of the late Triassic dinosaurs in western North America were turkey or eagle-sized animals.

Its limbs were longer and stronger than those of other carnivorous dinosaurs of the time, such as Allosaurus and Ceratosaurus. This became clear only after a detailed reconstruction, because earlier scientists thought that Dilophosaurus was associated with carnosaurs such as Allosaurus and Streptospondylus, therefore, they endowed it with the features of the pelvis structure characteristic of these dinosaurs and reduced forelimbs.

Scientists also found that Dilophosaurus, like many early dinosaurs and all modern birds, had respiratory air pockets growing into the vertebrae that provided strength while simultaneously lightening the skeleton. These air sacs provided a unidirectional flow of air through the lungs, while the entire cycle occurred in one breath, like in birds and crocodiles.

This type of respiration provides more oxygen than the bi-directional respiratory system of mammals, when air enters the lungs when entering and exits them when exhaling.

“Animals that breathe unidirectionally have a relatively high metabolic rate and therefore a high level of activity, so Dilophosaurus was probably a quick and agile hunter,” the authors of the article write.