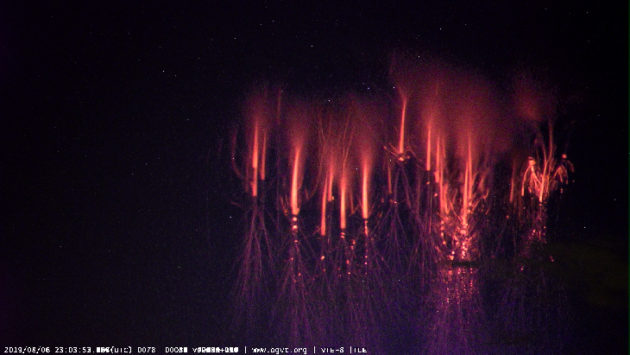 On August 6, Roger Spinner from Montsevelier (Switzerland) witnessed the likely picture. Red sprites flashed over a thunderstorm in northern Italy at a distance of about 215 km. Spinner recorded incredible HD video with his Sony A7s camera.

A storm raged over the Italian region of Lombardy – the camera captured 3 clusters of sprites. Similar to jellyfish, they reached more than 40 km in height – purple “tentacles” descended down to a thunderstorm, and red “heads” reached the border of space. Balls of red light with a diameter of only a few hundred meters dotted the “waist” and “tentacles” of these cosmic jellyfish.

“For me personally, these images are special,” said Spinner, who has been monitoring sprites in Europe for more than 7 years. “Although three clusters of sprites in one evening cannot be called something unusual for a severe thunderstorm, color video sprites in HD or 4K were previously impossible to obtain.”

In addition to the development of technology, this was facilitated by the intensification of cosmic radiation due to the solar minimum. During this phase of the solar cycle, cosmic rays penetrate through the weakened magnetosphere of the Sun and enter the Earth’s atmosphere in a larger than usual amount. Some researchers believe that additional cosmic rays provide an ionizing “spark” that triggers sprites.

Spinner knows where to direct his cameras, thanks, among other things, to weather maps. Mesoscale convective systems (cumulonimbus clouds) with strong lightning tend to produce better sprites. Distant storms, oddly enough, can be the most photogenic – a distance of 100 km or more allows the camera to shoot over a thundercloud.