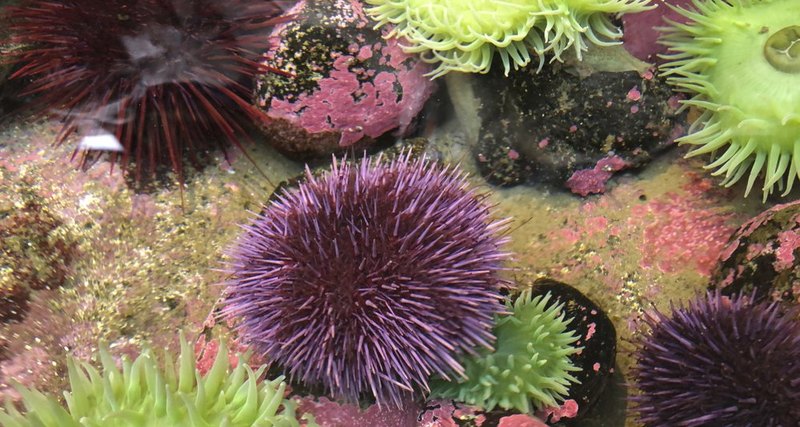 Sea urchin is a modest, sedentary and, in general, completely harmless creature. If you don’t step on it, of course. But, when there are too many hedgehogs, they turn out to be worse than locusts, just under water.

The Pacific coast of the United States, from California to Oregon, is experiencing an unprecedented disaster – the invasion of the purple Strongilocentrotus (Strongylocentrotus purpuratus). In recent years, hedgehogs have multiplied unusually abundantly, so their natural enemies – starfish – did not have time for this evolutionary success. Now the purple hedgehogs slowly crawl along the empty bottom and try to find food for themselves.

Strongilocentruses are omnivorous, but when they have a choice, they prefer fresh algae. According to the Associated Press, this has already led to the destruction of marine vegetation on a significant part of the Pacific coast. In the waters of Northern California, up to 90% of the thickets of brown algae are eaten, off the coast of Oregon kelp practically disappeared, the thickets of which a few years ago were so dense that it was difficult to swim through them on a rowing boat.

Scientists have counted 350 million purple sea urchins on a single shallow off the Oregon coast – a 10,000% increase over 2014.

Scientists attribute the hedgehog outbreak to two factors. Firstly, starting in 2013, coastal populations of sea sunflower (Pycnopodia helianthoides) began to decline sharply due to the epizootic of some unknown disease. This predatory starfish is the main natural enemy of Strongilocentrus and in previous years kept its strength at the same level at ease. Secondly, from about the same years, the increased temperature of the water created anomalously favorable conditions for the reproduction of hedgehogs. As a result of a sharp increase in their numbers, these echinoderms seriously endangered coastal biocenoses.

Purple Strongilocentrus reaches puberty in two years. We could not find data on its fecundity, but it is known that in most sea urchins, a female can sweep several million eggs at a time.

In addition to starfish, these hedgehogs are eaten by people – Strongilocentrums are used in Japanese cuisine. Alas, there are clearly not enough people to eat so many hedgehogs.