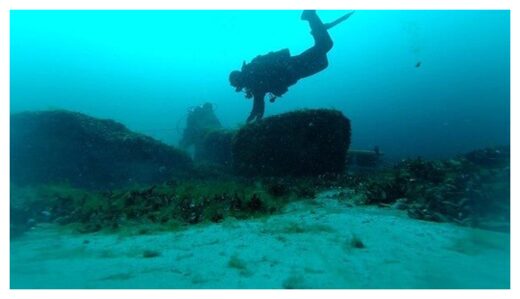 An underwater archaeologist at the University of Texas at Arlington is part of a research team studying 9,000-year-old stone tool artifacts discovered in Lake Guron from a 4,000-mile obsidian quarry in central Oregon.

The obsidian splinters from the underwater archaeological site represent the oldest and easternmost specimens of western obsidian ever found in the continental United States.

“In this case, these tiny obsidian artifacts show social connections across North America 9,000 years ago,” said Ashley Lemke, associate professor of sociology and anthropology at UT Arlington. “The artifacts found beneath the Great Lakes come from a geologic source in Oregon 4,000 kilometers away, one of the largest distances recorded for obsidian artifacts in the world.”

The unique study was a multifaceted effort involving divers in the water and researchers in the lab from UTA, the University of Michigan, the National Marine Sanctuary of Lake Superior, the University of Missouri’s Research Reactor Center, the Northwest Obsidian Research Laboratory and the University of Georgia. Their joint paper, “Obsidian from Central Oregon from a submerged early Holocene archaeological site below Lake Huron,” was published last month in the journal PLOS One.

Because the site was underwater and undisturbed, researchers systematically and scientifically extracted obsidian, a volcanic glass that has been widely used and sold throughout history as a valuable material for making sharp tools.

“These are very small pieces that can tell very big stories,” Lemke said. “Obsidian from the far west of the United States is rarely found in the east.”

Lemke is a leader and innovator in the field and is chair of the Advisory Council on Underwater Archaeology, an international group dedicated to underwater archaeology and the preservation of underwater cultural resources. She is an expert on underwater ancient sites in the Americas and has explored other areas such as the Gulf of Mexico and the Atlantic Ocean.

The discovery in Lake Guron is part of a broader study aimed at understanding the social and economic organization of caribou hunters at the end of the last Ice Age. Water levels were much lower then; scientists have found ancient objects, such as stone walls and hunting ambushes, which are now 30 meters underwater.

“This particular find is really interesting because it shows how important underwater archaeology is,” Lemke said. “The preservation of ancient underwater sites is unparalleled on land, and these sites give us a great opportunity to learn more about the people of the past.”