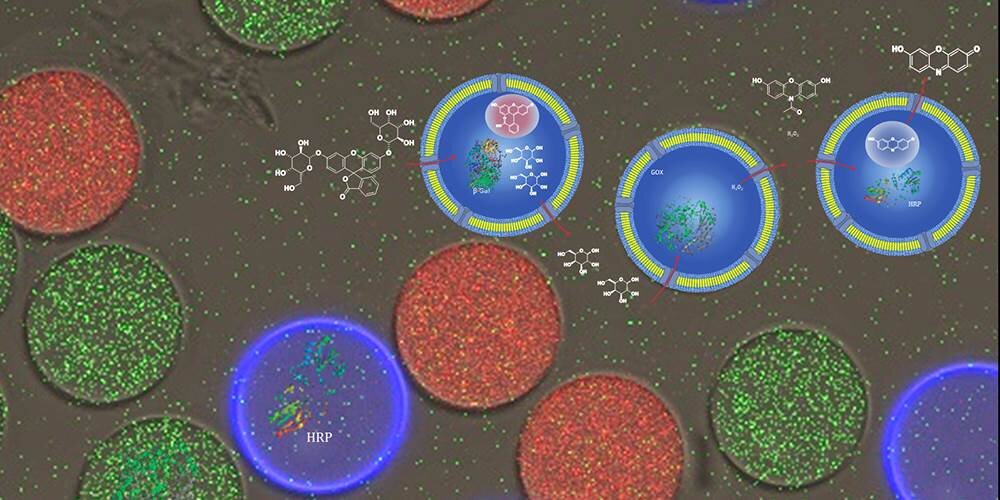 Researchers at the University of Basel have developed a precisely controllable system for mimicking biochemical reaction cascades in cells. Using microfluidic technology, they produce miniature polymeric reaction containers equipped with the desired properties. This ‘cell on a chip’ is useful not only for studying processes in cells but also for the development of new synthetic pathways for chemical applications or biologically active substances in medicine.

To survive, grow, and divide, cells rely on a multitude of different enzymes that catalyze many successive reactions. Given the complexity of processes in living cells, it is impossible to determine when specific enzymes are present at what concentrations and what their optimum proportions are relative to one another. Instead, researchers use smaller, synthetic systems as models to study these processes. These synthetic systems simulate the subdivision of living cells into separate compartments.

Now, the team led by Professors Cornelia Palivan and Wolfgang Meier from the Department of Chemistry at the University of Basel has developed a new strategy for producing these synthetic systems. Writing in the journal Advanced Materials, the researchers describe how they create various synthetic miniature reaction containers, known as vesicles, which—taken as a whole—serve as models of a cell.

“Unlike in the past, this is not based on the self-assembly of vesicles,” explains Wolfgang Meier. “Rather, we’ve developed efficient microfluidic technology to produce enzyme-loaded vesicles in a controlled manner.” The new method allows the researchers to tweak the size and composition of the different vesicles so that various biochemical reactions can take place inside them without influencing one another—like in the different compartments of a cell.

To manufacture the desired vesicles, the scientist feeds the various components into tiny channels on a silicon-glass chip. On this chip, all of the microchannels come together at a junction. If the conditions are configured correctly, this arrangement produces an aqueous emulsion of uniformly sized polymer droplets that are formed at the point of intersection.

The polymer membrane of the vesicles acts as an outer shell and encloses an aqueous solution. During production, the vesicles are filled with different combinations of enzymes. As the first author Dr. Elena C. dos Santos explains, this technique provides some key advantages: “The newly developed method allows us to produce tailor-made vesicles and to precisely adjust the desired combination of enzymes inside.”

Proteins incorporated into the membrane act as pores and allow the selective transport of compounds into and out of the polymer vesicles. The pore sizes are designed to allow the passage of only specific molecules or ions, thereby enabling the separate study of cellular processes that take place closely alongside one another in nature.

“We were able to show that the new system offers an excellent foundation for studying enzymatic reaction processes,” explains Cornelia Palivan. “These processes can be optimized to boost the production of a desired final product. What’s more, the technology allows us to examine specific mechanisms that play a role in metabolic diseases or that affect the reaction of certain drugs in the body.”

The work was supported by the Swiss Nanoscience Institute at the University of Basel, the Swiss National Science Foundation, and the National Centre of Competence in Research “MSE—Molecular Systems Engineering.”