Results of new researches of bats 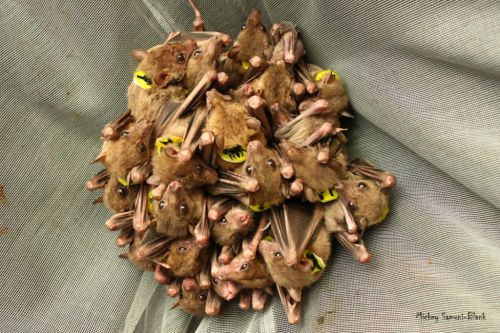 The pack of bats is a squealing and making a din society of winged creations, and noise which it makes, can deafen the unprepared person sometimes. However scientists managed to find out that for chaotic, at first sight, popiskivaniye the real language facilitating social communications in pack disappears.

If you share the close dwelling with numerous neighbors, free involuntarily it is necessary to develop certain norms of communication somehow to divide vital space with each other. And now present that you decade after a decade share the same dark, crude room with thousands of relatives. In this case communication has to be very strong, otherwise the conflict will inevitably break out.

It is about the Egyptian fruit-bats who live in big colonies and undoubtedly are social beings. If you visit one of caves in which they live, then the peep and rustles can deafen you first. But what it, usual noise which is always made by big crowd or animals thus communicate with each other?

In the research published in the Scientific Reports magazine, scientists have assumed that this noise and a povizgivaniye actually bear in themselves a set of useful information: who says what he does and as is going to arrive. “Earlier we classified vocalization first of all as aggressive behavior, that is considered that, giving a vote, mice show aggression or declare the rights for food or a female. Now we are sure that mice can enter collective conversations, and the fact that it seems to us cacophony, actually only the chorus from a set of voices”, is said by Yossi Yovel, the leading author of a research.

Watching pack from 22 individuals of the Egyptian fruit-bats within 3 months, Yovel and his colleagues could find out what mice have been involved in similar negotiations and about what was a dispute subject. Of course, it doesn’t mean that scientists in only three months have learned to understand language of bats or even their separate call signs. First of all they only have learned to distinguish in the general shout of a voice of this or that individual, and also have established that mice can do it too (by the same principles by which people recognize voices of other people in crowd). In addition, Yossi has learned to distinguish the popiskivaniye connected with food, relationship with companions or a request to release a little personal space. But it isn’t really similar to full social communication.

“We haven’t found words in this language, and especially any concrete messages. Imagine that it is just about a tonality and loudness of shout: let’s tell if two mice fight for food, they will peep much more thinly and are more shrill than if tried to divide the place in a cave”, the scientist explains. Studying of the vocalization made behind borders of a native nest will become the following step of researchers. For this purpose the team has equipped a cave and its vicinities with a set of microphones and as the nobility, perhaps will be over time enough information that people began to understand language of bats and would even learn to talk in it.