Revealed the secret of the most durable web 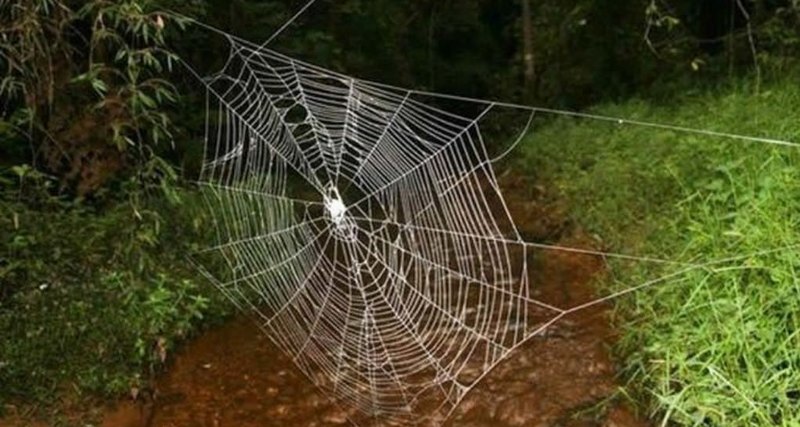 The spider Caerostris darwini from the family of orbits living in Madagascar are notable for their robust nets, reaching 28 sq. M. The supporting strands of the net can be up to 25 meters long, which allows the spiders to place them over difficult obstacles like rivers.

According to the design, the Caerostris darwini cobweb is not fundamentally different from the nets of the familiar crosses, but its strength makes the thread a popular object of research since the discovery of the species in 2001. The impact viscosity of the web, according to the test results, was 350 MJ / m3, and in some samples – up to 520 MJ / m3, which is twice the impact strength of previously known webs and 10 times higher than that of Kevlar.

In an attempt to deal with the causes of such high strength, an international team of scientists extracted cells that produce silk in the spinning organs of spiders, followed the activity of various genes in them, and deciphered their structure.

It turned out that the Darwin spider’s web consists of two protein molecules, previously known from other species and one molecule, which scientists have not previously come across. They called it MaSp4.

The links of this protein, built into the silk threads, can play the role of peculiar springs that help the web to stretch and at the same time maintain high strength.

“We hope that our discovery will be used to create materials that are not inferior in durability to the silk threads of the Caerostris darwini web, the most durable biomaterial on Earth. Our discovery has once again shown how evolutionary research is important for the development of biotechnology, ”Jessica Garb quoted from RIA Novosti, University of Massachusetts in Lowell (USA).

In addition to MaSp4, the unique qualities of the Caerostris darwini trapping networks may be related to the fact that its spinning organs have an unusually long length and are arranged slightly differently than other spiders. Both, as scientists assume, help the three types of spider silk protein links to more firmly connect with each other and line up in smooth lines, which simultaneously increases their strength and does not reduce flexibility.

All these discoveries, as scientists hope, will help create a full-fledged synthetic analogue of spider traps, and replace them with Kevlar in bulletproof vests, as well as classic silk threads in medicine, the textile industry and in other areas of human life.

Read the details in the article published in Communications Biology.