Riddle of creation of the world from the Old Testament 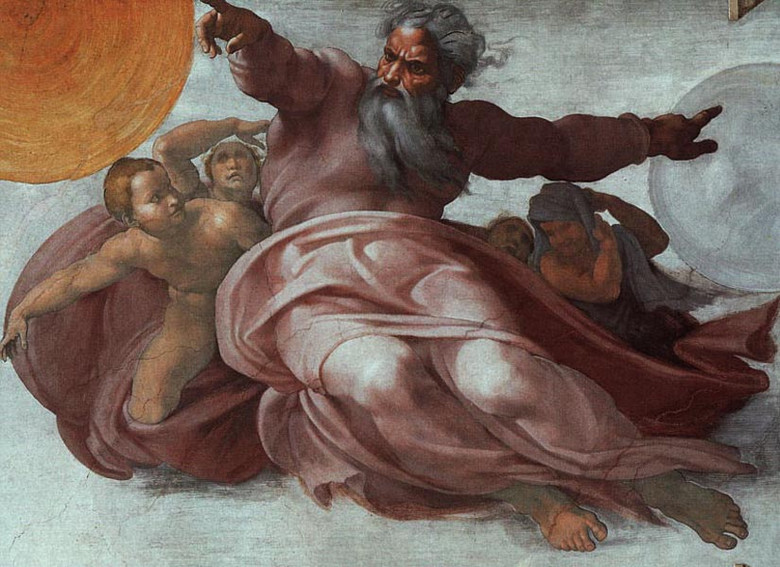 In the 19th century theologians have noticed that in the antiquated Genesis God in the 5th and 6th days of creation (day of God, according to Middle Eastern religious doctrines, in millions and billions of times surpasses day of the person in duration) creates representatives of terrestrial fauna in that order in what they appeared on Earth according to data of paleontology.

This fact has struck F. M. Dostoyevsky in due time: “Who has told when the science wasn’t?” — we read in his note notebook. Really, who could supply with such information to the author (or to authors) chapter 1 of the bible book? The paleontology science then didn’t exist yet!

And in the oral or written legend these data couldn’t reach it as the person has appeared on Earth much later of the described events (in any case, traces of his earlier presence aren’t revealed yet) that, by the way, is recorded and in the Bible — the person Bog creates in the last turn (Life, 1:27).

Well, well, we will allow — the unknown author “has remembered” the sequence of a paleogenesis, genetic memory has mentally repeated a way from an infusorian to Goma of the sapiens as physically repeats his human embryo in a maternal womb. But from where, how he has learned about what happened on Earth in those days when in general no life on her existed and couldn’t be?

How many generations of atheists light sources — the Sun, the Moon and stars — in the 4th laughed at the fact that light, according to the Bible, has arisen in the 1st day of creation, and: what, say, first three days star? At a turn of the third millennium when the mankind became better to imagine the past of the planet, it was, at last, possible to understand sense of the ancient text and to understand his imaginary contradictions. So, what in him is told?

And it is said in him that at the beginning there was a sky — Space and there was mother Earth. Through more dense, than today, the atmosphere on the Earth’s surface didn’t make the way a beam — Earth was “a bezvidna and is empty, and darkness over a chasm” (literally “over the ocean”); only “Spirit the God’s” (literally — “wind, breath”) “rushed over water”, covering all it entirely.

On the land greens, the grass sowing a seed” and “the tree bearing fruits” have appeared “: availability of light gave them the chance with the help the hlorofillovykh of grains to carry out oxygen and water exchange, to receive a bioenergy, necessary for activity.

For the 4th day “on firmament” “stars” began to dawn; at first two stars great have seemed “: the star is bigger, for management of day, and a star smaller, for management of night”, then “stars”; the 5th day has come, and animals have begun to be born (Life, I: 1 — 21).

As we see, a review point, location of the observer all these billions of years didn’t change: the observer didn’t see “light”, and also the Sun, the Moon and stars while they didn’t begin to dawn through the shrouding Zemlyuoblachny layer, but he didn’t see also the first representatives of terrestrial flora — seaweed, didn’t see inhabitants of ocean depths — fishes, crabs, starfishes, didn’t see insects — grasshoppers, butterflies, ants.

In other words, he didn’t rise in the top, rarefied layers of the terrestrial atmosphere, didn’t plunge into water of terrestrial oceans and seas and didn’t fall by the surface of the planet. Very precisely this location of “an extraterrestrial object” is transferred in the Vatican series of frescos of Michelangelo on plots from the Genesis.

The genius of the Renaissance has managed to notice what wasn’t noticed by generations of scientific commentators of the Bible: the main character of the 1st chapter steadily is in flight, and at rather small height. Only at the very beginning of the bible story a review point at a mysterious object other: he sees “sky” (Space) and sees “earth”, without distinguishing her details yet.

So it was for an object and how information collected by it was at disposal of the author of the Genesis? Scientists have no answer to this question yet.

In the little green men with antennas on the head making regular flights of our planet to the flying plate whom mass consciousness has occupied all her white spots — it is believed poorly. If any forms of extra planetary mind also exist, scientists, philosophers, fantasts claim, these forms — we will remember V. I. Vernadsky’s noosphere — essentially others, excellent from terrestrial.

The provided antiquated text puts researchers before one more problem. If the changes described in him happening on Earth are confirmed by data of modern science whether it means, as the statement of his author that all these processes resulted from the directed influence of a certain mind, perhaps, collective (Elohim, multiple from Al, traditionally translated as “God”, literally means “Strong, Mighty”) — is also true?

Singularity of this bible story is emphasized also that directly it is followed by another in which God is represented as an anthropomorphous being of Yahweh (“The one Who exists”: allegoric replacement, usual for religious practice, of the tabooed name of the idolized ancestor, an animal totem, etc.), and history of creation of the person and all live on Earth — according to traditions of West Semitic and world mythology and folklore (Life, 11:4 — 25).

Here, in this story, is narrated about how “the Lord of the person from ashes terrestrial has created”, and then, as “assistants” to him, “has formed of the earth of all animal field and all birds heavenly”. Both “any bush”, and “any field grass” have appeared only after the person has begun to cultivate the land.

In this story there is nothing mysterious. Yahweh in her is similar to the person — as the potter, molds from clay of people, animals, birds and as the gardener, is angry on the thieves who have broken fruits from the tree grown by him.

Judging by apocryphal retellings of the Genesis (“Enoch’s Book”, “Book of Anniversaries”, Agada идр.), the second option was more habitual and clear to ancient Jews — originators and the first admirers of the Old Testament, but not preceding him, will of inexplicable circumstances appeared in their sacred book, it isn’t known when also whom told to inhabitants of Earth.