Riddles that science has explained 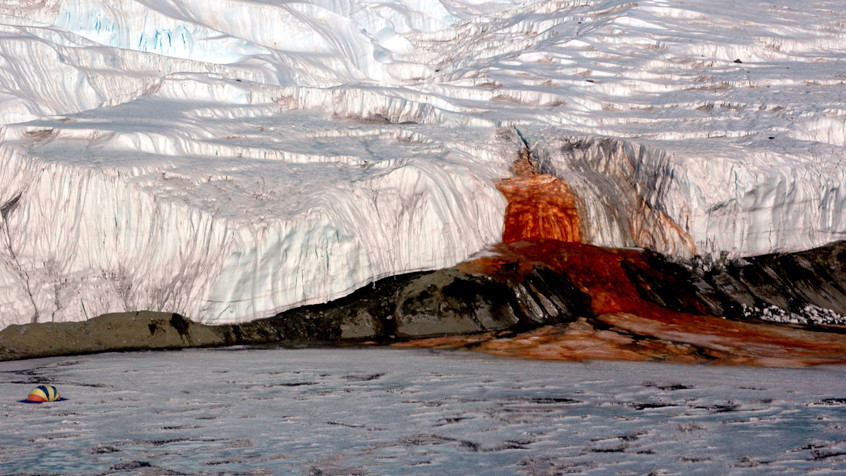 American researchers have found out where the Bloody waterfall originated in Antarctica. This unusual phenomenon was discovered at the beginning of the 20th century. Reserves of water in the Taylor Glacier have not dried out for more than a million years and from time to time are overthrown by a red-brown stream, which got this frightening name. What secrets have been discovered by scientists recently.

One of the last mysteries of nature, to which scientists found an explanation, was the source of the Bloody Falls. A mysterious phenomenon was recorded in Antarctica back in 1911. It has long been known the reason for the fluid, which runs down the Taylor glacier from time to time, is painted red-brown in color. This is due to the content of iron in the salt water (the oxidation process leads to coloration).

But the source of water itself could not be found for more than 100 years. Researchers from the University of Alaska and the College of Colorado tried to find it using radar. The results of the research surprised them: an ice-free source of water was found inside the glacier. Earlier it was believed that in such cold ice the water can not be in liquid form – it would inevitably freeze. And then there would not be waterfalls.

The solution, according to scientists, is somewhat paradoxical. The flow of water cools down under the action of ice. However, in the process of cooling, the water gives off heat, which undermines the ice. Ice melts and replenishes the water supply.

Researchers believe that the reservoir hidden in the glacier has existed for more than a million years.

Sometimes there is very little time between the appearance of the mysterious phenomenon and its explanation. So, in 2011, one of the villages in Alaska was struck by orange slime of incomprehensible origin. The media and the Internet immediately flooded with messages about its alien origin. Disputes about whether it is poisonous, did not abate for quite some time. Scientists immediately took up research, and the answer was not at all mystical.

A year later the researchers announced that the mucus was a large number of spores of rusty mushrooms, known for their orange color. Later it was possible to determine precisely the form: it turned out to be the Chrysomyxa ledi mushroom. I must say that the talk that this mucus is harmful is partly confirmed: this fungus parasitizes on trees and prevents them from growing. The mystery still remains the reason why a frightening amount of spores of this fungus suddenly appeared on the limited territory. It should, however, be noted that similar phenomena – the sudden increase in the number of plants or living creatures – arise from time to time in different parts of the planet. But this does not simplify the search for the reasons for their appearance.

One mystery stirred the minds of the townsfolk in Florida for several decades – from about the first quarter of the 20th century. It’s about the so-called Coral Castle. It was started by a local resident, Edward Liedskalnin, in the 1920s. The castle he built from limestone, giving it a bizarre shape.

Everyone was amazed how, to Lidskalninu, a person who had not received a special education, whose growth, moreover, does not exceed 150 cm, manages to build a huge palace without anyone’s help. I must say, the builder himself created around his work aura of mysticism. To friends and acquaintances, he announced that he had uncovered the secret of the construction of ancient grandiose structures. So there was a legend that Lidskalnin has knowledge about the hidden energies of the Earth and magnetism.

Everything was clarified thanks to Orval Irwin, a friend of Lidskalnin, who for many years worked as a foreman.

“In those years, when Ed began to deal with stones, people achieved everything afterwards and with blood. It’s not a question of mysticism, but of hard work, “he wrote in his book on the castle. In it, Irwin said that no innovations were used during the construction. Mechanisms for raising stones with the help of winches, for example, can hardly be called secret knowledge. Because Lindskalin worked alone, it really took a lot of effort. This explains the long period of work: construction continued until the death of the amateur architect in 1951.

The Mystery of a Dead Lake

It turned out that the reason for another mysterious phenomenon also has a completely materialistic explanation. It is a question of cobblestones moving along the Valley of Death in California. Researchers have long noticed ruts that leave rocks behind them. But why they are formed, until recently remained unclear: no one has ever seen cobblestones weighing up to 300 kg creep from place to place for hundreds of meters. American scientist Richard Noriss decided to solve this mystery.

Together with colleagues, he placed several boulders with sensors on the bottom of the dried Lake Rästrek-Playa, allowing you to monitor the movement of stones. It turned out that in winter, the ice-covered crust bottom heats up in the sun so much that the ice splits onto the plates and a layer of water forms under them. The wind moves the fragments of the ice plates, and they, in turn, cause the stones to move. And a layer of water accelerates and facilitates this process.

On the Greenland glacier there are lakes that can disappear in a matter of hours. This phenomenon for decades did not give rest to scientists. So, in 2006, a lake with an area of ​​5.6 square kilometers disappeared from the surface of the glacier in less than two hours. In the same way, about 13% of the Greenland lakes disappear. In 2006, it became clear that in such phenomena the cracks occurring in the glacier under the lakes are to blame. These cracks dissect the glacier to the base, and water drains first along the ice walls, and then along the ground into the sea.

And in 2015 the mystery of their appearance also opened. Using GPS technology, researchers from the Massachusetts Institute of Technology found that the cracks are caused by the gradual movement of the glacier. He crawls over an uneven surface, sometimes bumping into small hills. The front part of the glacier rises and actually hangs in the air. Under its own huge weight, ice begins to crack. The water from the lake gradually blurs the crack formed, it becomes wider and deeper. And finally increases so much that the lake disappears in less than a day.