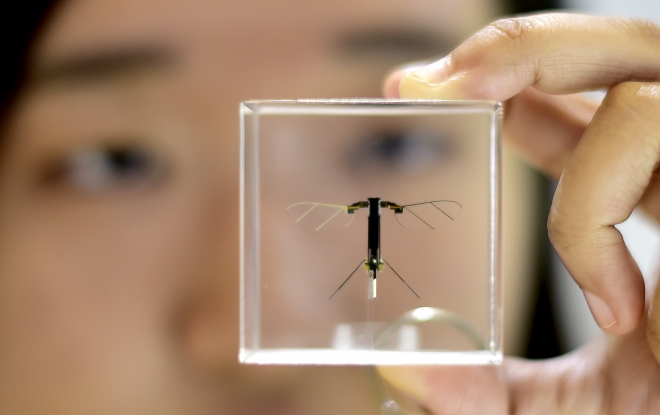 Modern farming methods and high rates of global warming threaten the existence of bees. At the Delft Technical University in Holland, a group of scientists began working on a possible solution to this problem and created a replacement for them in the form of robots.

In the new Dutch center Robohouse, they are sure that they will be able to design drones-bees that would repeat the complex patterns of movement, the aerodynamics of the bees and could pollinate the plants if insects become extinct. The frequency of wing flaps created prototypes – 17 times per second. They will be able to freeze in the air at one point, fly in any direction and make a 360-degree turn. The speed of the flight of drones is 24 km / h. Special sensors can be installed on them that will help them overcome obstacles and not collide with their “relatives” in the air.

Matei Karasek, who works on the project, says that they are not trying to copy flies or bees, but are trying to learn from them, but the technology limits how small these drones can be. The robot bee has a wingspan of 33 cm and weighs 29 g, that is, approximately 55 times more than a normal bee. At the moment, these drones can fly only 6 minutes or 1 km, but in the future, scientists plan to reduce the size and increase the operating time.
The Netherlands is one of the largest exporters of food and agricultural products in the world. And that bees pollinate about 80% of the crop in the country.

There are 360 ​​species of bees in the country, and half of them are endangered. This trend is also observed in many other countries, and pesticides are considered the main cause. The chemical element, thiamethoxam, significantly reduces the laying of eggs of female bees. According to some projections, this may lead to the complete extinction of some populations of bees.

Now developers are looking for commercial partners for their project.