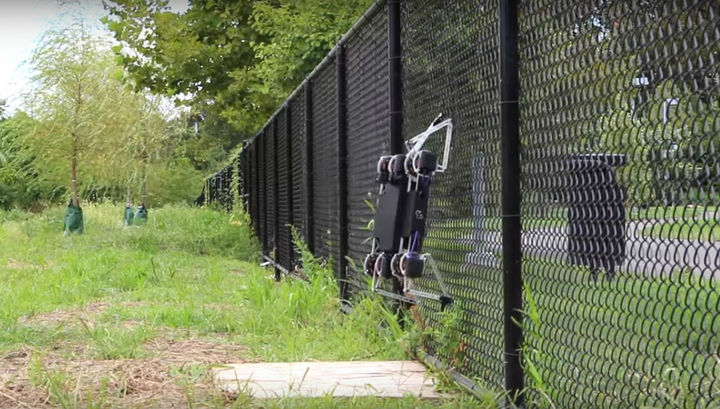 The American company Ghost Robotics, based at the University of Pennsylvania, is considered a leader in the field of research and development of robotic solutions with the use of the legs, direct drive and with the introduction of proprioception (sense of position of parts of the body relative to each other and in space).

Their new robot Minitaur (Minitaur), with a length of about 40 centimeters. The main features of the development of steel engines with high torque and legs of special design, which allow Minotauro to reach speeds in excess of 7 kilometers per hour and overcome a variety of obstacles, such as stairs or a four-foot fence, which is not under the power of existing commercial wheeled and tracked robots.

Managing computer Minitaur can be set to one of the variants of gait. For example, the robot can walk, gallop, run, trot and jump on all four legs, as do some species of gazelles.

Minitaure the sensors scan the surrounding space and determine the topography of the surface below in an instant to adapt the movements of the legs in case of road irregularities and obstacles.

In addition, using the limbs it can interact with different objects. So in the official video of the robot in the jump turns the door handle to enter the room, and with ease climbs on a metal mesh fence.

The idea of creating a robot able to run on rough terrain, imitating the behavior of animals, came up with the founders of the Robotics Ghost De Avik (Avik De) and Gavin of Kennealy (Gavin Kenneally), so to speak, for scoring purposes. They decided to create a compact and simple alternative to the famous BigDog robot from Boston Dynamics.
We are very excited to present its first commercial robotic platform Ghost Minitaur, says Kenealy in the official press release. – It was a long way of understanding and development, and we see our platform for many applications.

It is worth noting that the company is from Philadelphia while not positioning your robot as a mechanical pet. The project authors believe that their development can serve a more important search-and-rescue, military and other purposes, in particular where the need for accurate reconnaissance.