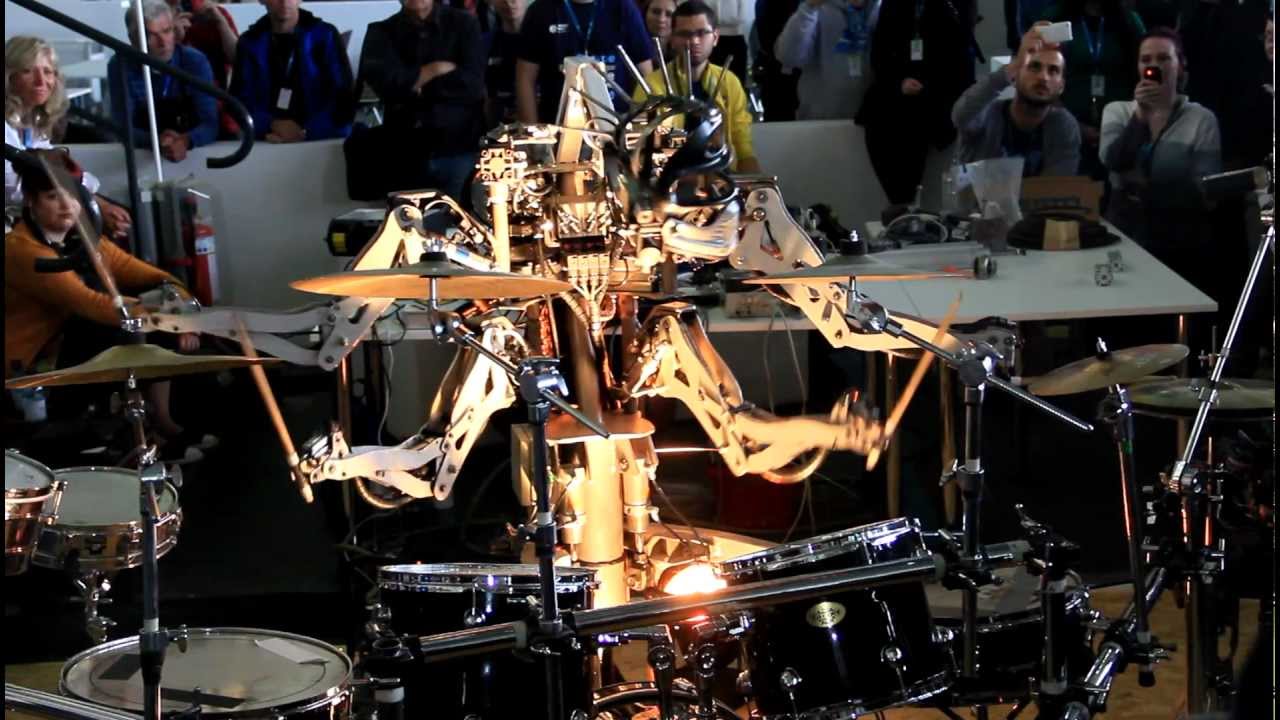 They say that Pink Floyd drummer Nick Mason once said that while robots won’t be able to throw a TV out the hotel window or to throw up in the dressing room, they’ll never replace real drummers. It’s hard to argue, although robots, drumming is not worse than the people today you can create even “in the garage”. So did the students of the Indian Technological University in the name of Abdul Kalam: the drummer that uses an ordinary Arduino, last year became the winner of the competition for the most talented robots at the festival Techriti.

To compete with the robots — lesson, apparently, hopeless: technology is evolving much faster than biology, and the ideal solution can be a symbiosis. Like what it show engineers from the team of Professor Georgia Institute of Technology Gil Weinberg (Gil Weinberg). Using its expertise in creating prosthetic limbs for patients, they made for the drummer of the third robotic arm, which does not replace a real musician, and helps him. Surely someday it will give the stage to the rhythms and solos that are physically inaccessible to the drummers, armed with just a couple of hands.

The music for this group, too, is already quite capable to write robot — that is, artificial intelligence. We already heard the lyrics and melodies, “hum” AI, and while they do not become too popular, technology continues to evolve more and more rapidly. And again in the symbiosis of man and computer may be a solution acceptable to all. An example of this was recently demonstrated by the developers at Sony CSL Research Laboratory. Using AI is “trained” on The Beatles songs. Work supported by French composer benoît carré (Benoît Carré), who arranged the music and wrote the lyrics. It turned out something quite worthy of the early Beatles, and this year Sony promised to release an entire album created by the Duo. So, the first track “Daddy’s car”:

But change not only performers and composers, changing and musical instruments. For example, the “cosmic piano” was developed by a physicist from the European organization for nuclear research (CERN), Arturo Tellez (Tellez Arturo) and assembled from parts remaining after Assembly of the ALICE detector at the Large hadron Collider. “Piano” contains a detector of cosmic particles, and the span of each causes the tone and colour luminescence, depending on the characteristics of the particles. It is a natural random number generator, but rather notes, based on which the experienced jazz musician al Blatter (Blatter Al) takes the captivating improvisation.

It seems the music of the future is a very broad strokes. Semi-robotic musicians, semi-computerized poets and composers, strange-sounding instruments… someday, looking back, we see her on the holographic screens and their grandchildren will be forced to admit: “In our youth, everything was easier.”