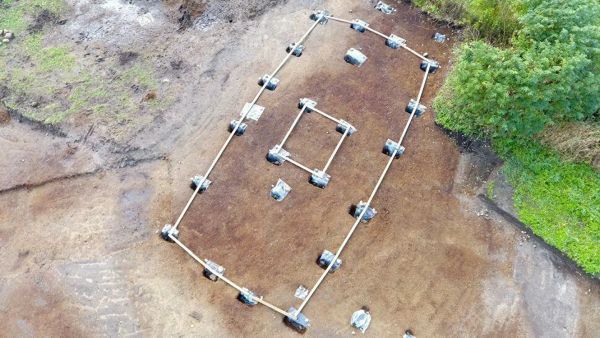 Archaeologists from the University Museum of Bergen have discovered the ruins of a 1.2 thousand-year-old Viking Age pagan temple during excavations in Western Norway, Sciencealert reports.

“This is the first ancient Scandinavian temple found in the country,” said archaeologist and scientist Soren Dienhoff of the University Museum of Bergen.

The foundation of the building, built several centuries before Christianity came to these lands, was found by archaeologists in the village of Osa on the site where a residential complex is now being erected. The temple, dating from the 8th century, was made of wood. And although the building has long been gone, scientists were able to figure out what it was like by the holes in the pillars.

Archaeologists have established that the temples were erected following the example of early Christian basilicas – with a high tower above a pitched roof. Travelers shared their knowledge about the arrangement of such structures with the Vikings.

“It all looked impressive,” Dinghoff said.

Scientists also claim that the Scandinavians began to build “Houses of the Gods” in the 6th century. Prior to that, religious rites were held outdoors. Major changes in society took place when the Vikings began to interact with the Roman Empire and the Germanic tribes of Northern Europe.

According to Dienhoff, after this, the Scandinavian religious beliefs became more ideological and organized. The ceremonies were held inside the “House of God”. Important holidays were celebrated there, for example, the days of the winter and summer solstices. One of the key points of the rituals was the offering of meat, drinks and sometimes precious metals to wooden figures of the main deities worshiped by the Vikings: Odin and the other twelve gods.

Scientists believe that the temple could have been destroyed in the 11th century when the kings of Norway forcibly imposed the Christian religion and destroyed buildings associated with paganism.