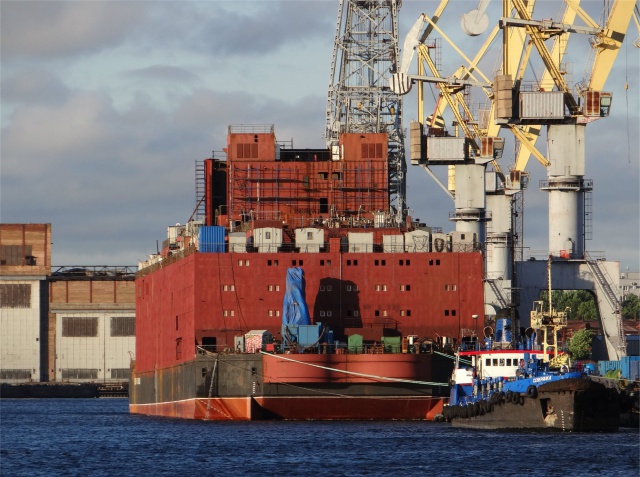 Started mooring trials of the first in the world floating power unit (PEB) “Akademik Lomonosov”. Tests on a special technological scheme and will be combined with the fitting-out works in the premises of the transshipment complex, hardware and machinery spaces that will require factory high organization and heightened security measures.

The objective of the mooring tests – verification of performance and conformity to design characteristics of equipment and systems of the floating power unit. “Conducting the mooring trials on the order is the most important stage of the construction that defines the beginning of its final stage. Starting tests in more than a year before the deadline for submission of PEB to the customer, we will be able to rectify possible shortcomings in the systems, equipment and machinery PEB”, – said General Director of “Baltic shipyard – Shipbuilding” Alex Gadilov.

According to the head of the project 20870 Aleksey Vladimirov, the tests sequentially to avoid overlapping construction and testing in the same areas and buildings under construction PEB. It is planned to complete the mooring trials – October 30, 2017.

And “Akademik Lomonosov” will come from the factory as a finished object, it’s on the Northern sea route (NSR) will be delivered to the place of work and will be connected to coastal infrastructure under construction at the port of Pevek.

In September 2019, Rosenergoatom intends to proceed with the installation of the unit, and in fall 2019 – begin tests of the NPP and to introduce it into the system.

Floating power unit (PEB) “Akademik Lomonosov” project 20870 designed for operation in the floating nuclear power plant (FNPP). The station is equipped with reactor plants KLT-40C, which can produce up to 70 MW of electricity and 50 Gcal/h of thermal energy, enough to sustain the cities with population over 200 thousand people.

The PEB is designed to work in the far North and the Far East. Head PEB “Akademik Lomonosov”, to build floating nuclear power station in Pevek in the Chukotka Autonomous district. PEB is the first project in the world movable generating unit of small capacity. Its main purpose is to provide energy for large industrial enterprises, port cities, and gas and oil platforms located in the open sea.

PEB with a displacement of 21.5 thousand tons can be used as a desalination plant, producing up to 240 thousand cubic meters of water daily. The lifetime of PEB – 35-40 years. Recharging of the reactor is carried out at intervals of 2.5-3 years. The team could reach 70 people.

FNPP is designed with a large margin of safety, which makes nuclear reactors invulnerable to tsunamis and other natural disasters. In addition, nuclear processes on the vessels meet all the requirements of the International atomic energy Agency (IAEA) and do not pose a threat to the environment.