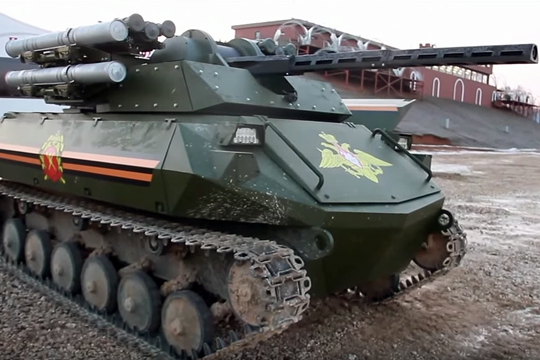 Currently, at least 56 countries are engaged in the development of combat robots. Among them are the USA, China, South Korea, Russia and others. It is assumed that in the future such devices will allow reducing personnel losses during combat operations, increasing the accuracy of reconnaissance and artillery strikes against enemy positions. The robotic complex “Uran-9”, developed by the enterprise situated near Moscow “766 UPTK”, will be used by anti-terrorist units, responsible for the fire cover of infantry and armed intelligence.

The robot “Uranus-9” belongs to the category of UCGV (Unmanned Combat Ground Vehicle) unmanned vehicles and is controlled remotely. The complex consists of a transport tractor, a mobile control point, and also two robots of fire support and reconnaissance. The system is based on the universal robotic crawler platform “Uranus” with modular load placement, including auxiliary and combat modules. The range of the platform, which can be used for different types of weapons, is estimated at one kilometer.

In the basic configuration, Uran-9 is equipped with a 7.62-mm PKTM machine gun or a Shmel-M jet flamethrower, an automatic 2A72 gun of 30-millimeter caliber and ten guided missiles. The robot can produce anti-aircraft missiles 9K33 “Igla” and antitank 9C120 “Attack”. The ammunition of the gun is 200 rounds, the rate of fire is 350-400 rounds per minute. For orientation on the terrain, the system is equipped with a laser rangefinder, temperature sensors, day and night vision cameras. The terrain is monitored in automatic mode: the robot is able to independently recognize and monitor the target. 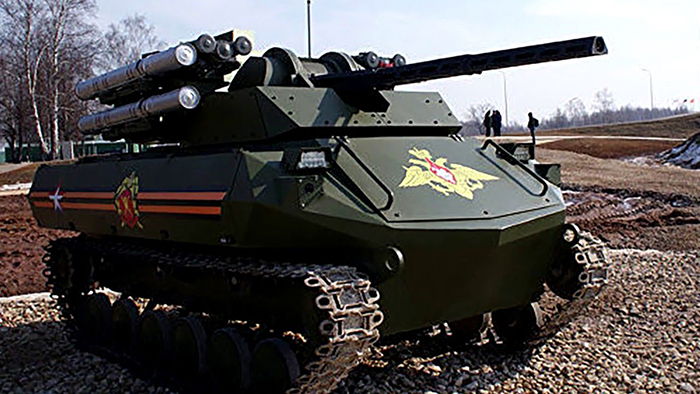 With engine power (YMZ 5347-16) 190 horsepower, the mass of “Uranus-9” reaches ten tons. The complex can overcome obstacles with a height of 1.2 meters. The maximum speed of the robot is 35 kilometers per hour, the power reserve is 200 kilometers. At one gas station, it runs until six o’clock.

Tests of the system are carried out in the Moscow region, the date of their completion is not specified. The video of the maneuvers is published on YouTube. It is not ruled out that the Ministry of Defense of the Russian Federation will receive “Uran-9” until 2018.

It is noteworthy that one of the possible tasks of “Uranus-9” is stated to conduct combat in a complex environment, for example, in conditions of dense urban development and on rough terrain. At the same time, robot control is carried out by means of radio communication from a stationary base, which limits maneuvering in the absence of direct visibility. So, moving a complex through a forest or a city can be difficult because of radio interference caused by obstacles. In addition, unlike devices designed to transmit satellite signals, communication with such a device can be easily interrupted by the enemy.

In May 2016, it became known that another Russian robot of the family, Uran-6, intended for demining the terrain, received an export passport that would allow the delivery of this type of equipment abroad. The system has a circular view and is able to automatically detect explosive devices, destroying them at the command of the operator.