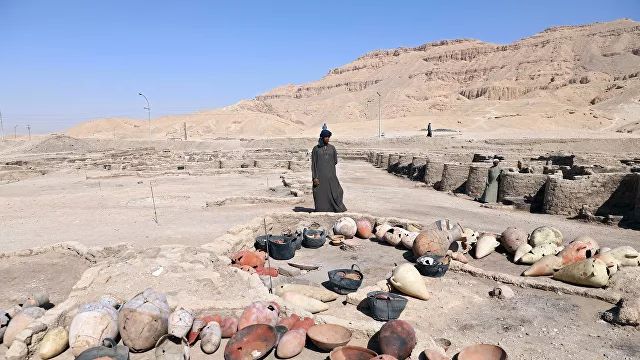 Russian archaeologists investigated a Byzantine Christian temple of the 5th-6th centuries AD in the ruins of the ancient city of Apameya in Syria as part of an expedition led by Natalia Solovieva, deputy director of the Institute of Material Culture of the Russian Academy of Sciences.

Recently Apameia was the site of active fighting. You can only move here with great care: there may be anti-personnel mines in the grass, so sappers ensure the safety of scientists.

“Now we are in the temple, which bears the code name” rotunda ” , – told reporters a researcher at the Institute Yegor Blokhin.

Scientists collect data for projects to restore architectural monuments destroyed during the war against terrorists. Using a drone, they create 3D models of architectural complexes in both the visible and infrared ranges. These models should serve as the basis for the restoration of old buildings.

In Apamea, there are buildings from three different eras: antiquity, the Byzantine Empire and the Arab Middle Ages. On the mountain, in particular, the Arab fortress Kaalat Al-Mudik rises.

“When there is a war, it is clear that no conservation measures are in effect. And only one thing is possible: to take measures as soon as the territory is liberated, it is imperative to take measures to preserve. an object to understand what urgent measures it looked like, “Natalya Solovyova, Deputy Director of the Institute of Material Culture of the Russian Academy of Sciences, explained the task of the Russian mission.

“I would like to say a big thank you to the group of Russian troops in Syria, the National Defense Center, the Ministry of Defense as a whole, without their help the expedition would not have taken place,” Solovyova added.

Russian scientists have already collected detailed digital information on early Christian monuments in other areas of Syria. In the old part of Aleppo, they found a church hidden inside the medieval Al-Halawiyya madrasah. During the fighting, several shells hit the temple, but, probably, its restoration will begin in the near future.