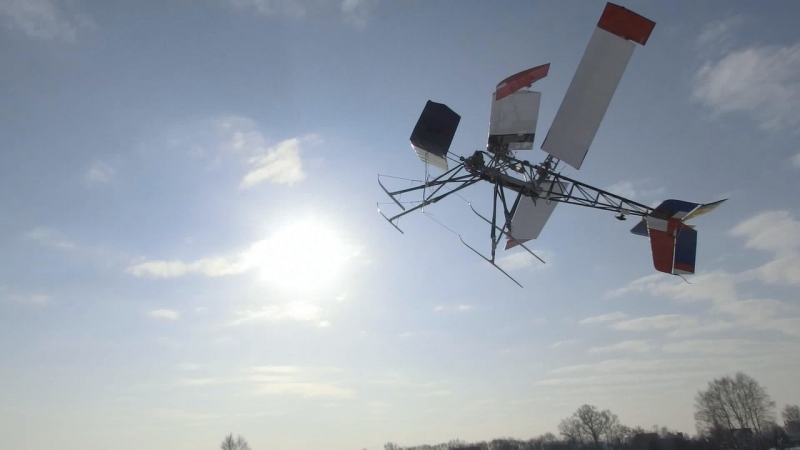 Russian engineers maevtsy Andrew Miller and Dmitry Shuvalov launched on kraudfandingovom platform Boomstarter campaign to raise funds for the design and construction of one of the most difficult and effective of the ornithopter.

The intent of the designers … flapping approach with a maximum takeoff weight of 30 kilograms can carry seven and a half kilograms of payload. Stock fuel will be enough for a 40-minute flight, and for takeoff and landing of an ornithopter will need a strip no longer than ten meters. The developers already have experience in the design Mahilyow — informed was custom built and successfully tested the first model of the ornithopter “Rare” with a takeoff weight of 28 kilograms. In the future, it was planned to design a manned mahalla, but the project stopped.

As the authors of the project, one of the key decisions in the design of apparatus “Rare-2” became the non-traditional layout of the internal combustion engine in which reciprocating motion is converted into rotational high speed, and then back to back-and-forth, but with low frequency.

“We do not use ice in a new drive concept at all. The biggest problem massacring machines — inertia. From it is not going anywhere — flapping wing has not weak kinetic energy. And the main problem on the first models were fighting with the effects of inertia of the wings. Now, there is one way of inertia to use for the benefit — for this you need to create the vibrational harmonic system to the kinetic energy went into the potential energy of a storage and back to kinetic.

The batteries we use air springs (cylinders). But there’s still directly the aerodynamic forces that tend to make these fluctuations are damped and here we comes to the aid of thermodynamics. Through a special damping chamber, we report oscillatory system additional energy to compensate for aerodynamic forces (actually creating thrust and lift force), and as the source of this energy is used the good old Otto cycle. Only it is used directly, without the cranks and connecting rods – we just take the energy of the expanding gas after combustion of the fuel,” explained Andrew Miller, project Manager.

Depending on the amount of donations the project managers offer different forms of consideration from the participation in lectures on mahaleth to control the prototype to the test. The minimum required amount for the project is 1.3 million rubles, the crowdfunding campaign will last for two months. Engineers expect that they will be able to combine the advantages of airplanes and helicopters. In addition, the flight “Rare-2” will be virtually silent compared to other motorized aircraft.

Despite the fact that the concept Mahilyow described quite a long time, fully manned ornithopter still does not exist. Most heavy aircraft with flapping wings use additional engines to maintain flight, for example, was able to get off the ground, the canadian unit UTIAS Ornithopter No. 1, which is 14 seconds of the flight covered a distance of 300 metres.