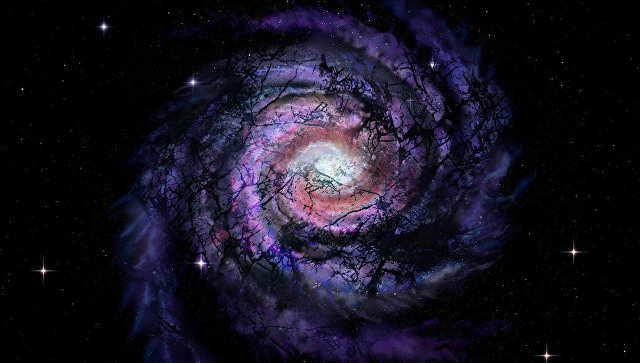 Physicists from the Institute for Nuclear Research of the Russian Academy of Sciences have shown that dark matter can unite into peculiar “drops” the size of a star, if its particles are light enough and “fluffy”. Their explosions can be sources of mysterious “alien radio signals,” according to an article published in the journal Physical Review Letters.

“In our work, we simulated on a computer the motion of a gas of light-dark-matter quantum particles, initially strongly“ mixed ”and interacting with each other by means of gravity. After a very long period of time, they independently formed condensate, which immediately curled into a spherical drop, Dmitry Levkov from the Institute for Nuclear Research, RAS in Moscow.

Today, almost all scientists are convinced of the existence of dark matter, but its properties, in addition to its obvious gravitational influence on galaxies and clusters of galaxies, remain a mystery and a subject of controversy among astrophysicists and cosmologists. For quite a long time, scientists assumed that it was composed of super-heavy and “cold” Wimps, which in no way manifest themselves, except by attracting visible accumulations of matter.

The unsuccessful search for wimps over the past two decades has led many theorists to believe that dark matter may in fact consist of so-called axions — ultralight particles that are similar in mass and properties to neutrinos. Other researchers suggest that dark matter may be similar in properties not to particles, but to liquid, or consist of several different components, one or more of which may gradually disintegrate.

According to the press service of the Russian Science Foundation, Levkov and his colleagues, Alexander Panin and academician Igor Tkachev, discovered a new exotic form of organization of dark matter, studying how the drive from axion or any other “light” dark matter will behave inside a typical dwarf galaxies where there is almost no visible matter.

Physicists have paid attention to the fact that various quantum processes will strongly influence the gravitational interactions of its particles. Due to the special nature of the axions, quantum interactions between them will occur at very large distances, comparable to the distances between the stars, which must be considered when calculating the properties and behavior of light dark matter.

Physics: the search for “heavy” dark matter once again did not produce results
Russian scientists have created a mathematical model that takes into account such interactions and how the fluctuations of the gravitational field affect the dark matter. Using these formulas, physicists “squandered” time forward and traced how the distribution of dark matter in these galaxies, initially randomly filled with it, would change.

These calculations showed an amazing thing. In the event that the individual axions were fairly light, and the galaxy itself was relatively small, the dark matter began to unite into peculiar drops, similar in properties to the so-called Bose-Einstein condensate.

It is an unusual form of matter, at the same time similar to gas and liquid. It consists of many particles, but behaves like a single atom and has typical “atomic” properties due to the fact that all its components occupy the lowest energy level.

Similar structures, as shown by the calculations of Levkov and his colleagues, can also arise in space from dark matter particles exclusively under the action of gravity, forming objects that physicists call “Bose stars”. The smaller the mass of individual axions, the faster such structures will arise.

If they exist, then traces of their existence can be seen in the form of powerful radio flares or peculiar explosions that occur after a sufficiently large number of axions accumulate inside this “star”.

The traces of these processes, as suggested by Russian physicists, can be mysterious “alien signals”, the so-called FRB flashes, as well as other unexplained extragalactic radio bursts discovered in recent years.