Russian scientist created an engine that contradicts the laws of physics 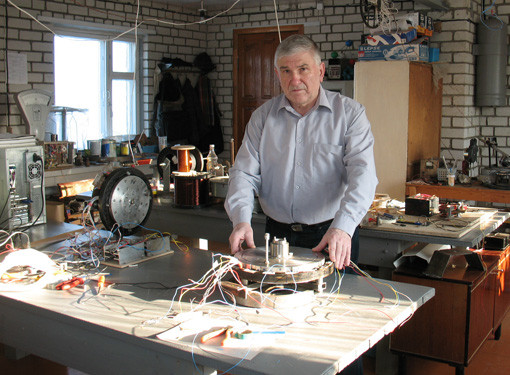 Laureate of the Russian Government Prize in Science and Technology Vladimir Leonov, a researcher in the field of antigravity, announced the discovery of a quanton (quantum of space-time) and the creation of a prototype of a quantum engine.

Back in 2009, he built an apparatus that moved horizontally, with no drive to the wheels. In 2014, the inventor introduced a device that ascended the guides. At a weight of 54 kilograms, the pulse ranged from 500 to 700 kgf, and the acceleration was fixed at 10 g. At the same time, the power consumption of the pilot plant is only 10 kW. For comparison: a modern liquid rocket engine for each kW of energy produces thrust of 0.1 kgf.

If Leonov’s quantum engine is brought to industrial assembly, there will be a real opportunity to create spacecraft with incredible characteristics. With a launch weight of one hundred tons, such a spacecraft can put 90 tons of payload into orbit. The Leonov engine provides traction through interaction with quantized space-time, excluding the very principle of jet propulsion. In one of the interviews the inventor stated that the spacecraft with its power plant will reach Mars in 42 hours with full compensation of zero gravity, the Moon – for 3.5 hours.

But these are large devices with a mass of 10-100 tons or more. In his opinion, it is possible to create a space mini-ship with a quantum engine weighing 100 grams to a kilogram with a nuclear battery. With continuous operation of the engine, the mini-ship can be accelerated to 0.9 light speed, where the relativistic effects are weak. At half-light speed, it will reach Alpha Centauri in about eight years.

The implementation of the project can take at least five years. Despite the very real results of the experiments not only in Leonov’s laboratory, but also in foreign scientific centers, the scientific community is skeptical about the created apparatus. According to scientists, he will not work in a vacuum. There is one more question that does not yet exist. However ideal Leonov’s engine is, it needs energy recharge. And its source must be very powerful, such as, for example, a nuclear cold fusion reactor.

Work on the creation of a quantum engine goes not only in the laboratory of the physicist Leonov. This topic is being studied in the USA, China, and England. British engineer Roger Scheuer patented his version of the engine EmDrive, although the principles of his work, too, do not find an explanation in terms of conservation of momentum. According to the inventor, the design of his engine allows you to convert radiation into traction. It is not possible to fix the emissions of photons, other particles, which could explain the appearance of thrust.

And this is a violation of the fundamental law of physics. It is in this “accused” and the apparatus of Leonov. Scientists from the Northwest Polytechnic University of China under the guidance of Professor Yang Juan created a prototype engine of this type with a thrust of 720 million nylons – it can be used in a satellite. Interest in devices that violate fundamental laws, are in NASA.

The created prototypes are inferior to Leonov’s quantum engine by orders of magnitude, and it is not yet possible to say how long it will take to make such developments real.