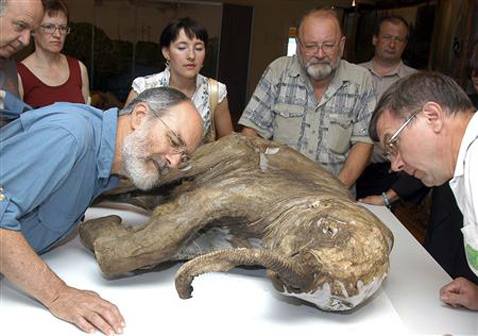 The opening of the Russian scientists, which will help to find answers to scientific puzzles of the past: bioengineers got the full genome of one of the oldest inhabitants of our planet – a mammoth.

These personnel in the future could be the beginning of the film about sensational breakthroughs in science. Taimyr. Archaeologists have found the remains of a mammoth. After a few days in the best Russian laboratories scientists will begin to analyze the genome of an ancient animal. After years of genetics summarize: three billion little pieces of DNA, and finally assembled into a single sequence.

“Now we have completed the full genetic information of mammoths. 50 thousand years, which is about three and a half billion letters, which were read, and created a kind of infrastructure, the system, in the centre of bioengineering Russian Academy of Sciences, at Moscow state University and at the Kurchatov Institute, which allows us to read ancient DNA,” explains the Director of center “bioengineering” Konstantin Skryabin.

Base for the study of ancient DNA will allow to study in detail, including the Neanderthal genome and learn how migrated on the planet people of different nationalities. In the Zoological Institute of St. Petersburg are confident ahead of the new discoveries in the field of evolution.

“These works are very important to establish the relationship between organisms. We can restore the phylogeny – from someone who came”, – says the Director of the Zoological Institute RAS Oleg Pugachev.

Who came from whom, and who the sick. Ancient genome in a wealth of information. Past, opens doors to the future. The genes – it’s like playing the piano. Like the keys, most of them remain untouched, involved only those which are necessary to create the melody, that is, cells of the body.

But the melody can change, knowing what kind of music is not enough for proper sound. Healthy parts of genes are able to grow in the laboratories of the Kurchatov Institute, on the basis of which was decoded the genome of a mammoth, in order to adjust future history of the disease is still in the embryo stage. And it’s not just about hereditary diseases.

“Studies of ancient DNA have become increasingly popular. In particular, they begin to engage Russian scientists, including scientists of the NRC “Kurchatov Institute”. So I think that in the near future we will be able to understand where, when and how human populations began to appear these mutations caused cancer,” says head of the laboratory of genomics and bioinformatics research center “Kurchatov Institute” Artem Nedoluzhko.

The Ob-Irtysh basin. The world’s largest natural focus of a serious illness — opisthorchiasis. The parasite enters the human body through raw fish and attacks the liver, until the diagnosis of cancer. Scientists decided to find a way of dealing with the parasite in him and read the genome of an organism.

“You can have the genome of this worm little and ask a person has this gene or not. And from someone who has – then he’s sick. And then, knowing all the letters of the genome, you can search for a cure,” says the Director of center “bioengineering” Konstantin Skryabin.

From microparasites to ancient animals weighing several tons. Scientists from all over the world agree that reading genes – the card of the XXI century. And be warned: the opening may be the most unexpected. Perhaps one day you will meet the woolly mammoth at the nearest zoo.