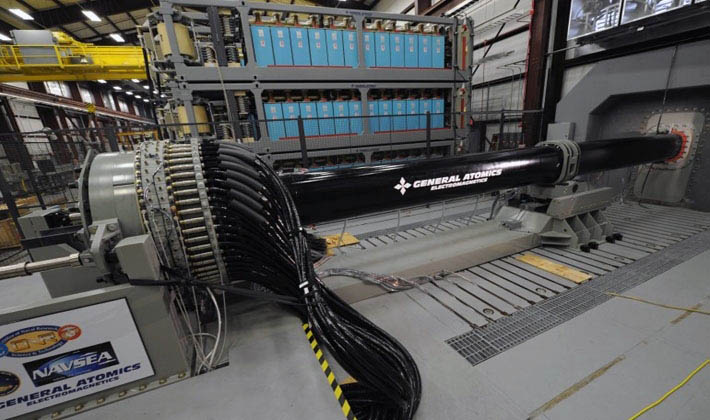 “Getting higher speeds is more difficult. Our objective is to obtain systems with large pressures and to explore with them the Universe. The second task — protection against high speed of cosmic bodies, representing a threat to us, including space debris, comets and so on. The next task is the output of satellites into Earth orbit”, — said Vladimir Fortov, President of RAS.

The so-called “railguns” are a special device capable of accelerating objects to extremely high speeds using the power of electricity and magnetic fields. As a rule, they represent a set of multiple parallel conductors, the so-called “rail”, through which current is passed ultrahigh strength. If this “rail” will touch the conductor, the Lorentz force will push out and up to ultrahigh velocities, unavailable for gunpowder weapons.

Such devices are now considered the basis for the creation of new weapons systems and means of output of goods into orbit. For example, the U.S. Navy seriously working on the creation of cannons at the base of the railgun since the mid 2000’s, when demonstrated the first prototypes of such systems that will be installed on destroyers of the new generation. On the development of “space” and military railguns work and Russian scientists.

Today, physicists from the joint Institute for high temperatures, Russian Academy of Sciences and President of the Academy Vladimir Fortov presented to the public the first such installation in the branch of the Institute in situated near Moscow Shatura.

According to representatives of RAS, at the moment, Russian scientists have managed to achieve acceleration of 11 kilometers per second when overclocking the “bullets” inside of their railgun. This speed is enough to overcome the attraction of the Earth and enter its orbit, and a little lacking for open space.

As noted FORTS that achieving such speeds requires such high currents and energies that all the components of the railgun quickly wear out and fail. Now the main task is to find materials that could withstand such loads, and how to protect them from wear and tear. Head of Academy of Sciences promised that in the near future the specialists of the Institute will prepare and post a video where you can see a shot of a railgun.

During a demonstration run of the accelerator has reached the speed of 3.2 kilometers per second, that the FORTS considered a good indicator. According to him, railgun, temporarily failed after the first “shot”, will be repaired tonight.

According to the academician, development and further exploration of how such electromagnetic accelerators will not only output loads into space and destroy dangerous objects when they approach to Land, but also to reveal the deeper mysteries of the Universe, how plasma behaves in space, how are born and stars die. In addition, the study of the behavior of the plasma inside the railguns, will help physicists to tame thermonuclear energy, than today, scientists have great difficulty in projects of ITER and NIF.