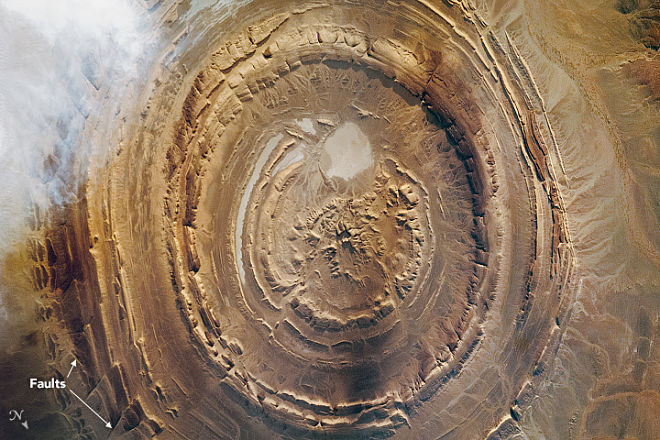 The geological structure of Rishat in Mauritania, also known as the Sahara Orot, attracted the attention of cosmonauts since the very first orbital expeditions to the ISS. It is assumed that this circular formation is caused by the elevation of the anticlinal dome, which was eroded, exposing layers of flat rock.

The structure of Rishat reaches 45 kilometers in width and consists of volcanic and sedimentary rocks, with the central rocks older than those that form the outer rings. The relief irregularities in the lower left corner are the result of the displacement of once continuous layers.

Most of Mauritania is in the Sahara Desert, where the harsh climate and periodic droughts create difficult conditions for life. The population of Mauritania is about 3.7 million people, many of whom live along the Atlantic coast, about 500 kilometers from the Rishat structure.